Arachnus are armadillo-like creatures found on SR388. They appear on SR388 in Metroid II: Return of Samus and appear in a mimicked form in Metroid Fusion. Arachnus appear much less often than most other creatures on SR388. An X Parasite mimics an Arachnus aboard the B.S.L research station. They are capable of attacking by with fireballs and they can also ram their targets.

Arachnus from Return of Samus

In Metroid II, Samus battles an Arachnus on SR388 that was previously mimicking an Item Sphere on a Chozo Statue. After Samus shoots the Sphere, it starts bouncing around and attempts to hit her. On occasion, it will stop to shoot a fireball. Samus can only damage it by dropping Morph Ball Bombs directly into its path, as any other attacks it will simply dodge. Once she defeats it, Samus acquires the Spring Ball. 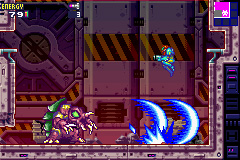 In Fusion, Samus battles an X mimic of an Arachnus on the Main Deck of the B.S.L Research Station. This Arachnus, due to the nature of the X, is much more aggressive than the one seen on SR388's surface. Its basic fighting abilities are similar to the one Samus fought on SR388, but the X mimic has a variety of other abilities. From its claws, it can unleash a large wave of energy, and its fireballs detonate on the ground, creating a wave of flame in its wake. Samus can defeat it by firing at its exposed chest, but its shelled back is invulnerable.

Samus is rewarded with the Morph Ball upon absorbing its Core-X. Arachnus displays the abilities of the Morph Ball by rolling around in its shell to attack Samus during the battle. 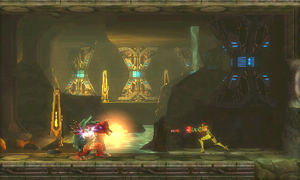 Samus attacking Arachnus with a missile

Arachnus returns in Metroid II's remake, Samus Returns. Like Fusion, he is vulnerable to missiles hitting his front. 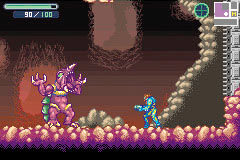 A beta image of Metroid Fusion, showing some unused imagery