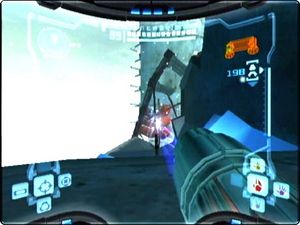 Samus fires at fuel cells to knock down a Space Pirate tower and obtain the Artifact of Elder.

The Artifact of Elder is in the Control Tower in Phendrana Drifts. To acquire this artifact, Samus must melt the ice outside the window of the eastern elevator tower using the Plasma Beam and fire Missiles at the now-exposed fuel cells. Afterward, she can approach the tower that collapses as a result of the explosion and roll through the small passage in Morph Ball mode.