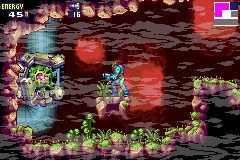 An atmospheric stabilizer disturbed by the X parasites

Atmospheric stabilizers are units designed to control the atmosphere of the B.S.L research station's Sector 1 (SRX). They were used to form a small-scale replica of SR388's atmosphere. Using these systems, the B.S.L researchers were able to foster rapid development of juvenile Metroids.[1] There are five atmospheric stabilizers, all in separate rooms. Interestingly, Hornoads seem to have concentrated their nests near the Stabilizers, non-mimicked Hornoads can be seen in the backgrounds of these rooms. Each room locks when Samus enters the room until the stabilizer is returned to its original state.

By the time Samus first arrives in Sector 1, the X have begun disrupting the stabilizers in an effort to create an environment optimal for the X themselves.[2] Samus finds the stabilizers disrupted by a structure resembling a Kago nest. While the atmospheric stabilizer is covered by this structure, it will constantly release X into the room, there will be a repetitive sound, and the room will be foggy, representative of the different atmosphere in the area. Samus manages to clear all of the stabilizers shortly after obtaining the Charge Beam.