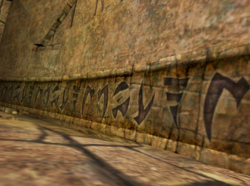 The Chozo Language is a runic language[1] used by the Chozo. Though the language has never been spoken aloud in-game, there are many examples of the written Chozo language in their settlements, such as the ruins on Tallon IV. The language is so complex that Samus's Translator Module has at times had difficulty in translating it,[2] and Space Pirate language databases and linguistic analysts have had even less success.[3]

Much like the Luminoth, who use their written language as locks to block access to key areas, the Chozo also used Runic Symbols, likely a part of their written language, to hinder intruders. Chozo runes were also etched into the surfaces of the 12 Chozo Totems and could be scanned to gather clues concerning the Chozo Artifacts.[4]