Soon after Samus Aran defeated Metroid Prime in Tallon IV's Impact Crater, the creature reached out for Samus in its dying moments and grabbed hold. After a brief struggle, Samus escaped, but it had ripped off her Phazon Suit in the process. Samus escaped the scene of the final battle and left it to die in a collapsing cave while escaping to her Gunship. However, Metroid Prime was not finished; it combined elements from itself, Samus, and the Phazon Suit and was reborn as a completely new entity, known in the future Prime games as Dark Samus. Dark Samus then made her way to Aether somehow, most likely by stowing away on a Space Pirate ship.

Dark Samus landed on Aether an unknown amount of time before Samus arrived in search of lost Federation soldiers. The Space Pirates mistook Dark Samus for Samus Aran but were confounded by her aberrant behavior; instead of destroying the Pirates, she consumed their Phazon, only killing those that attempted to stop her from doing so.[3] Her irrepressible infiltration and repeated raids cost the Pirates much in the way of Phazon, and she even crippled their stealth field generator on at least one occasion, leaving them especially vulnerable to Federation attack.[4] It was only after Samus Aran made planetfall on Aether that the Pirates realized they were dealing with a second Hunter, and considered trying to forge an alliance with Dark Samus in an effort to repel Samus's assaults.[5] 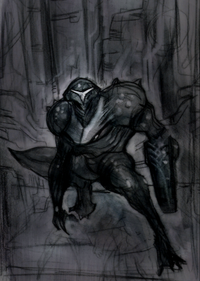 Samus first encounters Dark Samus inside an abandoned Galactic Federation base set up by the GFMC Task Force Herakles on Aether. Samus follows Dark Samus through a Dark Portal leading to Dark Aether and finds her absorbing Phazon on the other side of the portal. Dark Samus destroys a Light Crystal that Samus is near to, allowing a group of Warrior Ing to swarm in and steal most of Samus's equipment. Samus narrowly manages to escape from the Ing before Dark Aether's atmosphere causes any severe damage to her.

Later, Samus briefly encounters Dark Samus in a Space Pirate facility in the Agon Wastes. Dark Samus shuts off the most direct route through the facility, forcing Samus to take a different route. Shortly thereafter, Samus finds Dark Samus in the Main Reactor, absorbing more Phazon once again, and engages her in battle. Dark Samus uses many variations of Samus's weaponry, but Samus defeats her counterpart. However, contrary to appearances, Dark Samus was not destroyed entirely.

Samus comes across Dark Samus again in the Training Chamber of Torvus Bog. Dark Samus reforms, laughs, and then dissipates without attempting to intimidate or attack Samus. Her intentions during this encounter were unclear, and Dark Samus does not show herself to Samus again until she travels to Sanctuary Fortress.

When Samus arrives at the Sanctuary Entrance on her way out, Dark Samus again confronts Samus. Dark Samus destroys the bridge structure here in an attempt to prevent Samus from using it to access the elevator leading from Sanctuary to the Temple Grounds. Despite the bridge being destroyed, Samus is able to use her recently recovered Spider Ball to cross the newly-formed gap. They encounter one another again in the Sanctuary; on this occasion, Samus finds Dark Samus obliterating three Dark Pirate Troopers attempting to force her to take a detour to access the Phazon. Samus follows after Dark Samus. They engage in combat again in the nearby Aerie Access elevator, which Dark Samus activates, and the battle continues into the Aerie Transport Station chamber. Though Dark Samus demonstrates several new techniques, including a powerful variant of the Charge Beam, an augmented Boost system, and the ability to render herself invisible to the normal light spectrum, Samus is able to defeat her again. Dark Samus then staggers and falls off of the edge of the fortress, though data indicates that she will be able to reform herself after sustaining any damage short of total atomic disruption.[6]

Not long after Samus eliminates the Emperor Ing and acquires the Light of Aether from Dark Aether's final Energy Controller, the planet becomes unstable. While Samus attempts to escape Dark Aether, Dark Samus blocks her path with a wall of Phazon in an attempt to impede Samus's escape. By this time, Dark Samus has absorbed excessive amounts of Phazon into her system rendering her unstable without venting excess Phazon energy.[7] After Samus deals adequate damage to her, Dark Samus temporarily becomes a being of pure Phazon energy and creates a shield impervious to all weaponry, save for blasts of Phazon.[8] By using her Charge Beam, Samus draws in expelled Phazon then fires it back at Dark Samus. After several blasts, Dark Samus disintegrates.

After Samus successfully completes her mission on Aether and departs, a cloud of Phazon in space above the planet coalesces and forms a new body for Dark Samus. It seems that she was unable to maintain this form, as she is later collected by Space Pirates in the form of raw Phazon.

Dark Samus is reborn aboard a Space Pirate cargo vessel.

After her defeat on Aether, Dark Samus's remains are picked up by the Space Pirate battleship Colossus, which had been retrieving the remainder of the Phazon on the planet Aether. Dark Samus was able to regain her form using energy from Phazon stored on board. Once she regained her form, she proceeded to kill a third of the Space Pirates on the ship.[2] Dark Samus then brainwashes the remainder of the Pirates into following her.[9]

After subduing the Space Pirates, Dark Samus leaves them adrift and ventures off alone to the planet Phaaze, the source of all Phazon. She returns to her followers atop a Leviathan, a destructive seed of Phaaze; she orders the Space Pirates to follow her back through a wormhole to her homeworld, and those who refused were slaughtered.[1] With the aid of her corrupted disciples, Dark Samus invades the G.F.S. Valhalla to acquire an Aurora Unit with which she might better control her living planet. Outmatched by their Phazon-powered weapons, the Valhalla was rendered helpless, the Aurora Unit 313 taken, and the crew jettisoned into space.[10] Dark Samus takes the Aurora Unit to Phaaze, implants it there, and takes command of the entire planet. From there, she sends a Leviathan to the Pirate Homeworld, using it to corrupt all the Space Pirates living there and gradually turning the Pirate Homeworld into a living planet of Phazon like Phaaze.[11]

Dark Samus launches three additional Leviathans, destined for Bryyo, Elysia, and Norion. Dark Samus goes to Norion herself to ensure the Leviathan's impact, since it is heavily guarded by the Galactic Federation.[12] The Leviathans bound for Bryyo and Elysia strike successfully, but the one headed for Norion fails. Samus Aran, Rundas, Ghor, and Gandrayda manage to repulse the Norion attack, but Dark Samus infects the four hunters with Phazon.[13] Samus was able to resist Phazon's corrupting influence, but the three other bounty hunters eventually succumbed and became the servants of Dark Samus.

Samus heads to the location of each impacted Leviathan, defeating a corrupted Hunter and a mammoth Leviathan Guardian at each planet. She then uses the Leviathan that Dark Samus used to take the Space Pirates to Phaaze to warp to Phaaze.

The only direct battle between Samus and Dark Samus happens on Phaaze. After her defeat, Dark Samus merges with Aurora Unit 313. Samus destroys the Aurora Unit, which purges the Phazon from her, and Dark Samus is exterminated with no signs of survival.

Dark Samus appears as an unlockable playable character in Super Smash Bros. Ultimate, and is an echo fighter of Samus.

Samus's first battle with Dark Samus takes place within the Space Pirates' mining facility in the Agon Wastes. Samus encounters her doppelganger in a room designed to process Phazon; Dark Samus absorbs a large amount of the Phazon and battles Samus. Dark Samus utilizes several attacks based off Samus's weapons, including attacks based off Missiles, and a variant of the Charge Beam that fires many scattered shots. If Samus attempts to fire a Missile at or enters a certain area around Dark Samus, Dark Samus generates a Phazon-based shield capable of damaging Samus and repelling all attacks for a brief period of time. After half of Dark Samus' energy is gone, she glows blue and begins using several new abilities. She begins using an attack similar to Samus's Super Missiles and starts floating up in the air gathering energy before charging at Samus. After the battle, Samus gains access to the Dark Beam.

The next battle between Samus and Dark Samus takes place on the Aerie Transport Elevator. Samus finds Dark Samus absorbing a quantity of Phazon on a wall. Dark Samus then activates the elevator and the battle begins. Dark Samus uses much of her attacks from the previous battle, but she also uses some new attacks. She breaks out an attack based on Samus's Boost Ball and ricochets around the room. She also has the ability to become invisible to Samus's Combat and Scan Visors this battle, forcing Samus to switch to the Dark Visor to see her. She continues to use her Super Missile and charging attacks, this time with more frequency. After the battle, Samus is able to solve a puzzle granting access to the Echo Visor.

Dark Samus in her unstable form

Dark Samus attacks Samus once again, this time as Dark Aether is collapsing. Dark Samus uses a few basic attacks, including turning invisible to all visors but the Echo Visor. After Samus damages Dark Samus enough, Dark Samus becomes even more powerful. She now can only be damaged by her own Phazon, caught in Samus's Charge Beam. She also fires large blasts of Phazon that cannot be caught in the Charge Beam. Eventually, Samus defeats her nemesis and escapes to Aether in the nick of time.

Many of Dark Samus's abilities are similar to Samus's, though some abilities are not shared between the two. Her basic beam fires a scattered burst of Phazon, she may charge this to fire a sustained beam of Phazon. Dark Samus can fire a beam that can encase her target in Phazon, similar to the Ice Beam. She has a form of the Boost Ball that she can allow her to boost far longer than Samus is capable of doing. She can generate a shield that is impervious to all attacks, save blasts of Phazon; she will often use this when Samus fires Missiles at her. She also can become invisible.

After her defeats on Aether, Dark Samus gained ever more abilities, some absorbed from the Phazon-corrupted Hunters that Samus defeated. She is capable of generating Echoes of herself that may attack while Dark Samus absorbs energy to heal herself. She and one of the Echoes can simultaneously fire a sustained beam while spinning. She may also spin without firing a beam. Dark Samus is also capable of creating large pillars of ice and generate shock waves.

"Dark Samus can be defeated by dealing enough damage. However, anyone who gets too close to her may receive a burst of Phazon energy."

"This energy-based life-form looks a lot like Samus. Dark Samus fires homing energy blasts and rapid-fire rounds at fighters on the stage."