A Game Over occurs when Samus's energy reaches zero or the timer for a Countdown runs out -- that is, whenever Samus dies. Progress in the game stops immediately and the player must continue from their last Save. A Game Over is usually accompanied by a brief cinematic and the option to continue or quit.

In Metroid, Samus explodes and she sees a black screen "Game Over" then the options "Continue" and "End" will appear. Above, the player will see the password to save the progress. In the Famicom version, the player sees Samus crouched down and the same options as the NES version, but they will see a text that says "DEFEAT MOTHER BRAIN AND THE METROID THREAT"

In Metroid II: Return of Samus, Samus disintegrates and then you see Game Over, but here the player does not have the option to continue or exit, but instead, they will return to the last point where the game was saved.

Before there was a censorship on the Game Over screen since it was believed that under the suit Samus was naked, although nothing far from reality, the player can still see Samus half naked only covered by a bikini. 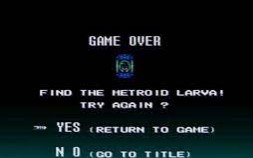 First, the player sees see Samus floating in the air and her suit is destroyed in a halo of light, then you see "Game Over" and the options to continue and exit, in the background is a nebula. 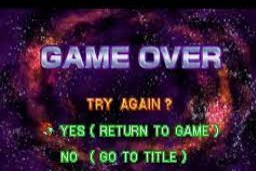 The nebula on the game over screen of Metrd Fusion

In Metroid Prime, the life support of the suit is turned off and Samus dies at that moment while a large crack is seen in the visor of her helmet. 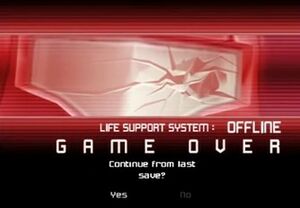 In Corruption, if Samus depletes her energy via the Grapple Voltage, an additional heavy breath can be heard before she blacks out.

A variation of the shut-off visor effect was also used in the preview trailer for Echoes as SPC C. Campbell is killed by a Dark Splinter.

In Metroid: Other M, the Game Over combines elements from that of the classic games and the Prime series. Samus screams and falls to the ground, with her Power Suit disappearing and leaving her in her Zero Suit as she loses consciousness. The screen then fades to a light-green tinted flickering background and the words 'GAME OVER' and "CONTINUE? YES/NO" appear, with the option to continue the game from the last checkpoint reached.

When dying, Adam will frantically contact Samus, saying, "Samus! What's going on? Respond! Respond!". He will not say this if Samus dies after the cutscene preceding the Ridley battle, due to the fact that contact had been lost with her. It is interesting to note that nothing is said by Adam if Samus dies during the Brug Mass battle. If Samus dies in lava, she falls in and sticks her hand out in a futile attempt to pull herself out. If dying in the arms of a Kihunter, Samus will simply become limp in its arms with her suit staying intact. If she runs out of Energy in the Queen Metroid's stomach, the Morph Ball will be surrounded by stomach acid. If Samus gets caught by Vorash in the boss battle with low health she will get pulled into the lava while in Vorash's teeth.

There are conditions where Samus is killed instantly. In the Biosphere, it is possible for a moving elevator to crush Samus and kill her if she fails to enter an alcove built in the sides of the room within a certain time limit. If Samus fails to avoid the Vorash's jaws in the "lava cavern" of the Pyrosphere, the creature will digest her. While Samus races up the Crater Interior, if she falls into the lava, the Goyagma will immediately grab her and pull her into the lava, though it will not do so after Samus reaches the top. In the Cryosphere, failure to escape from an avalanche will have Samus being buried under a large mass of snow, filling the screen to white. As Samus is escaping Sector Zero, any attempts made by her to Space Jump out towards an intact segment of the sector results in her falling into the abyss of space.

The only other condition where a Game Over is received if another character dies is when returning to the Pyrosphere; if Samus fails to save Anthony Higgs from being dropped into the lava by the Rhedogian, this results in a Game Over.

If Samus fails to escape the BOTTLE SHIP at the end, a cutscene of the destruction and flashbacks to the death of Adam and the supposed death of Anthony plays. The destruction part of the cutscene is also seen when Samus envisions the Federation destroying the ship, while questioning why they did not do so.

If the Federation Force dies in any mission, the screen will display a message saying "Mission Failed: You were defeated." The message will change if the Game Over was for another reason, such as if a mission objective is failed.

In Metroid Dread, in addition to the classic Game Over, there are moments where the death animation is skipped and immediately fade to the Game Over screen: