Humans are a species presumably originating on the planet Earth. They most prominently appear as the military force of the Galactic Federation. In addition to this, the bounty hunters Samus Aran and Armstrong Houston are members of the Human race. Out of Samus's missions, Humans played a more important role in destroying the planet Phaaze and rescuing Bottle Ship survivors. Out of all other sentient, self-aware species, Humans appear most often throughout Samus's journeys.

Although Samus was born on K-2L and not Earth, her parents Rodney and Virginia Aran were both Human colonists, so Samus was born as a Human. At the age of three, however, Samus was infused with Chozo DNA, gaining Chozo abilities but keeping a Human appearance.

Samus later, at an age around fifteen through seventeen,[citation needed] joined the Galactic Federation's military. While in the military, her superior was Adam Malkovich, a friend she kept dear until even after his death. She also met Ian Malkovich, Adam's brother, and Anthony Higgs. Out of these Humans, Anthony Higgs is the only one to be alive.

Across her missions, Samus often encounters Humans. Usually, the humans she encounters are Federation troopers or researchers. In certain cases, however, they are victims or even enemies.

In her Federation days, Samus was sent on a reconnaissance mission with Kreatz and Mauk to gain information on Space Pirate activity on Jigrad. The planet, it seems, was inhabited by Humans, possibly colonists like K-2L's colonists. The three learned that the Pirates were using the Humans as slaves for construction. While Samus's mission was strictly to gain information, she confronted the Pirates directly and stopped their actions and the team freed the enslaved Humans. Among these Humans was a young child named Damara. Samus briefly re-encounters Damara years later, who has since apparently idolized Samus, when Damara is joining the Federation Police.

When Samus lands on Aether to locate and assist Federation troopers, she finds that there are no living troopers. Some of the troopers she went to Aether to save, however, are controlled by the Ing post-mortem, and attack Samus. While it is the Ings' conscious that decide to attack Samus, they use Human bodies to do so.

Like her mission on Aether, Samus is sent to find any survivors aboard the B.S.L research station. Again, with no success, Samus finds only corpses of Humans. Like the Ing, the X control the corpses and rise to stand against Samus. These Zombie Researchers are very frail and have limited offensive capabilities against Samus. Later, Samus is faced against a Human controlled by a Core-X, aptly named Human Core-X.

Humans and the Galactic Federation 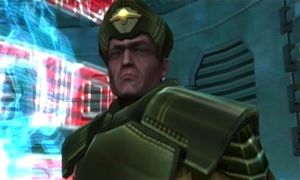 Shortly before Samus investigates Aether, Human Federation troopers making up Squad Bravo were killed in action by the Ing horde. Judging by their anatomical features and Captain A. Exeter's face, it is safe to assume the troopers are all Human. There is, however, no explanation behind why they are Human and not of another species. The task force also consists mostly of males, though it is revealed that this may be due to the military's sexist nature.

In the mission to destroy the source of Phazon, Samus was under the direction of Fleet Admiral Castor Dane, a stern Human male ordering an entire fleet of Federation troopers. The fleet itself consisted of only Humans and machinery, including the Aurora Unit, AU 242. All Federation PED Marines and marines are assumed, like Echoes marines, to be Human based on their physiological features. Outside the military, however, Admiral Dane seems to have hired a squad of bounty hunters of various species, Rundas a Phyrigisian; Ghor of very mechanical origins; Gandrayda of a shape-shifting race; and Samus, of course, a Human. This suggests that the Galactic Federation is willing to hire other species to serve as military muscle.

Some time after the final destruction of Mother Brain, Samus found herself aboard the Bottle Ship. Here, Samus met the Galactic Federation 07th Platoon under the command of her friend Adam Malkovich. Among these six troopers was another friend from Samus's military days, Anthony Higgs. Besides these two, the squadron consisted of K.G. Misawa, James Pierce, Maurice Favreau, and Lyle Smithsonian. This task force along with previous forces extends not only the idea that Humans dominate the military, but that males do as well. 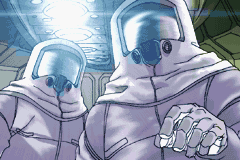 Samus's first known encounter with field scientist was her delivery of the last remaining SR388 Metroid to Ceres Space Colony. All the scientist she met and later, their corpses, were humans. This instance, however, can be explained by Ceres's proximity to the planet Earth. Assuming Ceres and Earth are close, it is no wonder that all the scientist on the space station were Humans.

Samus later encounters Federation researchers in the Galactic Federation Headquarters. The same scientist that debriefed her and "polished her suit". They were all Humans as well. This can be explained simply by the fact that this GF headquarters was on Earth.[citation needed]

Not long after her debriefing, Samus finds herself aboard Bottle Ship. While the ship is home to many strange and familiar creatures, the Federation researchers running the ship were of the most familiar species: none other than Humans. The Bottle Ship is not assumed to be anywhere near Earth, yet the researchers manning the station were all Humans. It is reasonably, in fact implied, that there are species out there with greater technological and intellectual potential than humans, such as the Luminoth, Chozo, and Ylla. Despite the presence of species of such potential, Humans are the ones assigned to man and research the Bottle Ship.

Finally, Samus's mission on the B.S.L research station was also completely dominated by Humans. Her initial mission to escort B.S.L researchers on SR388's surface safely entailed her guarding a couple of Human scientists. Later, when she boards the X-infested station, Samus finds many species as research subjects and their X variants, but all the researchers are Human. This is owed to no obvious fact, however there are many explanations to this. A possible explanation is that the Biologic Space Labs organization is exclusive to humanity, though reasons for this would be unknown.