The Ice Beam is a weapon which has been used regularly by Samus Aran, absent only in Metroid Prime 2: Echoes, Metroid Prime Hunters, and Metroid Prime 3: Corruption. Like many upgrades to the Power Suit, the weapon is of Chozo design. When fired, it produces a frigid beam that can freeze many targets. Frozen targets can then be destroyed by a Missile impact, or used as platforms. Due to their sensitivity to cold, the Ice Beam is a potent weapon in the extermination of Metroids. This weapon has appeared in nearly every game in the Metroid series, and has played a vital role in each appearances. 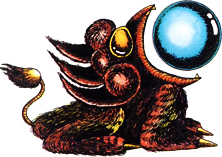 The Ice Beam is present in two locations - Brinstar, where it is found fairly close to the location of the Bombs, and in a hidden area in the upper right corner of Norfair. Both locations, however, require the use of the Bombs. With the Ice Beam, Samus is able to freeze enemies solid with a single shot, with another shot afterwards doing damage and unfreezing them (that is, if they're not invincible like Rippers). These enemies can then be used as makeshift platforms to reach higher places. However, they will thaw after a while, and killing them with just the beam takes twice as many shots as it normally would, making it more practical to use Missiles to kill them. In addition, it cannot stack with the Wave Beam, meaning collecting one will replace the other (though the old beam does return to its original location(s)). Although the weapon isn't strictly necessary, Samus would be hard pressed to clear Tourian without it.

Unlike the original game, the Ice Beam is only found in its Norfair location. In order to get to it, Samus must use the Power Grip to traverse over blocks above a sea of magma. As before, it allows enemies to be frozen and used as platforms, but it now follows Super Metroid's iteration in that it does increased damage to foes, and rather than freezing them instantly, it instead freezes them when they take enough damage. The weapon is also capable of being stacked with the Wave Beam now, giving Samus the properties of both. Unlike the original game, the Ice Beam is definitely needed as all Metroids in Tourian must be destroyed in order to progress towards Mother Brain.

While exploring the Chozo Ruins, Samus comes across the Ice Beam in the Antechamber. With it, she can shoot low temperature shots from her Arm Cannon. The Ice Beam's shots, however, are far slower than any other beam, limiting its usefulness in rapid-fire combat. Charged shots can freeze certain enemies solid, leaving them open to be smacked with a Missile and shattered, though certain foes won't be affected by this. The Charge Beam is also capable of letting the Ice Beam use the Ice Spreader once Samus finds it. Frozen enemies cannot be used as platforms.

In the original Gamecube version of Metroid Prime, the Ice Beam causes a frigid aura to emerge from the Arm Cannon (and charging it freezes it over), but this effect is removed in the New Play Control!/Metroid Prime Trilogy releases owing to the new motion-controlled aiming.

The Ice Beam appears relatively early in Samus's excursion to SR388, within Chozo ruins behind a Red Door. The weapon can once more freeze foes into makeshift platforms, but unlike Metroid, frozen enemies stay frozen after being shot again, making it quicker to kill foes with it. As before, though, it is replaced if Samus picks up another beam upgrade. The Ice Beam appears again in an area with the Spazer, Wave and Plasma Beams, but the entrance to the final area contains a third Ice Beam. This is fortunate, as juvenile Metroids infest the area and can only be damaged when frozen, unlike their later evolutions.

While in Norfair, Samus can locate the Ice Beam in an area to the left of the entrance, but the Speed Booster is needed to access it. With it, Samus's beam becomes more powerful and freezes enemies. Unlike before, it only does so when an enemy has taken enough damage, making it even less tedious to fight enemies with it. The weapon can also be combined with other beams, giving it their properties.

Authorized in the Pyrosphere, the Ice Beam can freeze small enemies. Adam authorizes the weapon while Samus battles enhanced Zebesians and other enemies with increased shielding capabilities. The upgrade is required to defeat many bosses in Other M. Aside from its increased power, the freezing ability of the Ice Beam becomes useful. It is also required to bypass certain obstructions, such as freezing a platform in place. Unlike other games, frozen enemies cannot be used as platforms, but the weapon does set some enemies up for an Overblast or a Lethal Strike. Also unlike other games, frozen enemies fall due to gravity instead of staying in place. Most freezable enemies are only partially freezable; that is, only a section of their bodies is frozen. For example, Dessgeega are frozen only at the legs, and Zebesians' claws are frozen shut.

Although Samus owns the Ice Beam at the start, she loses it due to an X Parasite infecting her suit, requiring pieces of it to be surgically removed. The vaccine that purges the parasite also alters her cellular structure to become part Metroid, giving her their weakness to cold and preventing her from using the Ice Beam (using Ice Missiles as a substitute). The SA-X, however, uses the Ice Beam's deadly effect against Samus, being able to freeze her solid and do immense damage. While fighting against it on the Main Deck, she manages to reduce it to a Core-X, but it flies away before she can absorb it. This SA-X soon shows up to fight the Omega Metroid just as the Biologic Space Labs Research Station falls towards SR388, but is reduced to its Core-X again, though this time Samus absorbs it. This act restores her cellular structure to its original state, granting her the Ice Beam and the ability to use it with no ill-effect to herself, and she promptly uses it to kill the Omega Metroid and escape.

The Ice Beam made one extremely brief appearance in the Metroid Manga. Samus presumably obtained the Ice Beam between the time she left the Federation and when she returned to complete her Zero Mission. Samus shoots the Ice Beam, Wave Beam, and Plasma Beam once against Ridley.

While the Ice Beam is absent in Metroid Prime 2: Echoes, the Dark Beam functions identically to it as it was in Metroid Prime, only encasing enemies in dark matter and not ice.

The Judicator is the Affinity Weapon of the bounty hunter Noxus. This weapon shoots plasma at sub-zero temperatures.

Metroid Prime 3: Corruption lacks the Ice Beam, but does have Ice Missiles. These freeze enemies on impact, but as a consequence can't shatter frozen foes. Metroid Fusion also has Samus use Ice Missiles, owing to her inability to use the Ice Beam.

The Freeze Gun in use

In Metroid: Other M, the Galactic Federation 07th Platoon is armed with notable Freeze Guns, which act very similarly to Samus's Ice Beam.