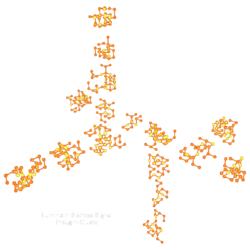 The Luminoth Language is the communication form used by the Luminoth of Aether. Written in a complex three-dimensional representation often witnessed on Aether in holographic form, this language was used extensively to record the Luminoth's history and even lock specialized gates that blocked access to key areas. These symbols can be combined into clusters to forms words. It appears that these complex symbols were depicted on a two dimensional plane by writing them with minor distortions to render them legible prior to the invention of three-dimensional displays.

Samus is incapable of deciphering this writing system without various updates to her Translator Module.[1] The first update she receives is from U-Mos, who gives her access to Violet Holograms.[2] The Sentinels I-Sha, A-Voq, and O-Lir update her module to read Amber, Emerald, and Cobalt holograms, respectively.[3][4][5] Interestingly, she does not need her Module updated to read Luminoth Datapacs. 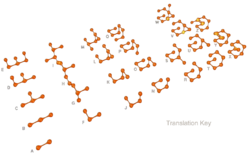 Coincidentally, the only transliterated Luminoth word is Ing, which means terror. Other words represented in this writing system can be translated directly into English using a translation key provided in Echoes' Concept Gallery.