This article was written by Malake256 and does not necessarily reflect Metroid Wiki's views. 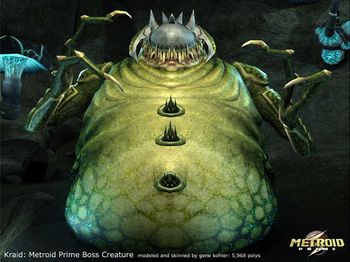 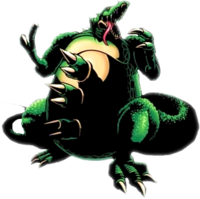 As Metroid fans, it's very easy to recognize the face of the giant green, scaled boss: Kraid. His thus far appearances have been unforgettably legendary, appearing in only three Metroid games, all in two dimensions. There were, however, plans for a three-dimensional appearance for the first 3D game in the series released, Metroid Prime. Unfortunately, a strict release date forced Retro Studios to cut this "Meta Kraid" out of the game. One and only one image of this Kraid has been released in Metroid's history. The image, to the left, shows Kraid in a cave-like area surrounded by Phazon. Because of this and Kraid's metallic helmet, fans speculated ravenously to this new Kraid's whereabouts, reaching to a consensus that the creature was infused with Space Pirate technology much like Meta Ridley, hence naming it "Meta Kraid".

Meta Kraid, it is also speculated, is tied to certain other upgrades that also were planned to appear in the game, possibly the Screw Attack or Speed Booster. The creature also contains the same projectiles it has always fired, suggesting they may have been part of the battle. His claws were lengthened and Meta Kraid has received shield-like shoulder pads. Aside from these differences between Meta Kraid and the familiar Kraid, the most notable differences remain the presence of Phazon and Kraid's helmet. Its menacing helmet seems to blind Kraid, however, also possibly creating some battle element.

In terms of the storyline, many have believed that Kraid was the replacement to Omega Pirate. This, however, is highly unlikely with so many scans and data pointing toward the pinnacle of Project Helix. Due to Meta Kraid's location in the image, it can, however, be assumed that his battle would have taken place in Phazon Mines. Details of the battle are, of course, unknown. At this point, it is highly unlikely that they will ever be known. Retro and Gene Kohler have done well to hide any traces left behind of Meta Kraid. It is unknown why Kraid did not appear in either of the consequent Primes or even Other M, a game highly influenced by Super Metroid.

Kraid is always one of my favorite bosses. Aside from his extremely difficult original Metroid appearance, I enjoy defeating this creature over and over. Meta Kraid would have been an amazing inclusion to Prime, my very favorite Metroid game. One of the best aspects of the recurring Kraid has been the music tied to his hideout, that would have been amazing of course. Unfortunately, Meta Kraid's cut seems to have been one of the most regrettable cuts known to Metroid fans. Of course such a decision cannot be reversed, however there will always be the hope to look forward to a game featuring Kraid in three dimensions.