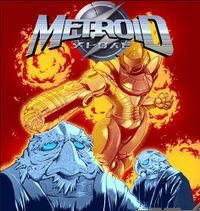 The cover of the second volume

Released only on Nintendo's Japanese Metroid site, the Metroid e-manga is an online adaptation of the japanese Metroid manga released in 2002, which was the first official comic book adaptation of the Metroid storyline by Nintendo. Licensed works had appeared in the past on the pages of Nintendo Power and in separate releases. E-manga is a manga comic that uses effects done with Flash-programming to animate the frames and add sound effects as well as music. Western audiences had to rely on fan-translations of both the manga and its e-counterpart for years until Nintendo finally decided to release the whole thing in English in 2009.