Omega Metroids are nearly full-grown Metroids, grown past the Alpha, Gamma, and Zeta phases. If they have a specific gene, they can grow to become a Queen.

While on SR388, Samus battles four Omega Metroids shortly before encountering a Queen. These attack by firing energy bursts and by ramming. Samus can defeat the Omega Metroids by firing thirty Missiles to their chest or back. 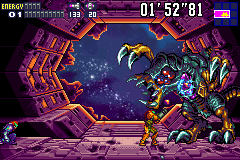 An SA-X attacking an Omega Metroid

On the B.S.L Research Station Samus encounters a single Omega Metroid shortly after defeating an SA-X. This one is invulnerable to all of Samus's current weapons. The Omega Metroid takes Samus's energy to a critical level, but it is attacked by an SA-X before it can finish her off. After the SA-X is defeated by the Metroid, Samus absorbs its Core-X, allowing her to regain the Ice Beam and defeat the Metroid.