Zebes is a recurring planet in the Metroid series. After her home on K-2L was taken over by a Space Pirate invasion, the Chozo took Samus to Zebes, their homeworld. There, according to the manga, Samus was infused with Chozo blood and technology, allowing her to utilize the Power Suit. Samus trained with the Power Suit under her Chozo elders, especially Old Bird. The planet was later colonized by Space Pirates.

The planet is in the same system with Oormine II, Twin Tabula, Bilium and Tallon IV. It is shown being orbited by two moons. Zebes is described to be a Class XIX planet, that is, inhospitable to most bioforms. The planet's crust is primarily Urithic ore, making it ideal for underground tunnel constructions, and a mass of 4.8 teratons.[1]

Zebes was originally a Chozo world, and was where they raised Samus. It was later infiltrated and colonized by Space Pirates. The Galactic Federation, fearing the Space Pirates would use their base on Zebes to multiply Metroids for use as a bioweapon, hired the Bounty Hunter Samus Aran to eradicate the Space Pirate presence on Zebes, as depicted in Metroid and its remake, Metroid: Zero Mission. 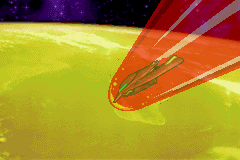 Zebes as it appears in Metroid: Zero Mission

After Samus successfully defeated the Space Pirates on Zebes and their leader, Mother Brain, she encounters the Pirates again in the same star system while responding to a distress signal emanating from one of their research frigates, which managed to escape the destruction.[2]

Some time later, Samus eradicates the Metroid infestation on SR-388, save for one specimen that she entrusted to the scientists on the Ceres Space Colony. That specimen was stolen by Ridley and taken back to Zebes, where the Space Pirates had reestablished much of their subterranean network. After the final battle with the rebuilt Mother Brain, the base suffers a massive explosion that results in the destruction of the planet. However, many of its lifeforms lived on onboard research stations like the Bottle Ship and the Biologic Space Labs Research Station, the former of which Samus likened to a "nightmare version" of the planet.

Zebes is a Class XIX world, with a harsh environment that is inhospitable to most lifeforms. Its surface is under a constant deluge of Acid Rain, likely caused by natural phenomena such as volcanic activity or lightning. The planet's crust is composed primarily of Urithic Ore, making it especially suited for subterranean construction. Thus, several unique, underground areas sprawl beneath the surface of Zebes and are home to most of the planet's inhabitants.

Crateria is the area that makes up the planet's surface and is where Samus originally lands her Gunship when infiltrating the planet. The areas exposed to the acid rain are largely devoid of life and constantly pummeled by lightning strikes. The neighboring Wrecked Ship, the remains of a crashed vessel from an ancient civilization, and Chozodia, the ruins of an ancient Chozo colony, are part of Crateria.

Brinstar is home to both a rocky zone with little plant life, and an underground jungle environment full of vegetation and teeming with wildlife. The lower Brinstar section, bordering the superheated Norfair area, is composed of red soil and less flora than the levels above. In Super Metroid, Brinstar encapsulates the Kraid area, where Samus encounters the high-ranking Space Pirate, also called Kraid, and part of the original rocky Brinstar area.

Norfair is situated deep within the heart of Zebes, and home only to the most resilient lifeforms. Full of scathing lava pools, Norfair is largely inaccessible to Samus even while wearing her Power Suit until she acquires the Varia Suit upgrade. Norfair also encompases the Ridley area, where the Space Pirate leader Ridley is fought.

Maridia is composed of flooded subterranean caverns infested with vicious fish and crustaceans. Parts of Maridia are also artificial, seemingly serving as a base for Draygon. The oceans and thick sand make traversing this area without the Gravity Suit upgrade impossible for Samus.

Tourian was the Space Pirate headquarters constructed beneath the planet's surface. Originally, it was situated just under Crateria, but after its initial destruction by Samus Aran, it was reestablished deeper inside Zebes's underground network. The environment is completely synthetic, constructed of artificial materials and composed primarily of laboratories where the Space Pirates experimented with Metroids. It was also the central location from which Mother Brain commanded her forces in both incarnations of the area.