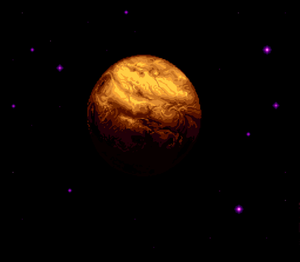 Zebes is a class XIX planet

Planets in the Metroid universe are classified differently by different cultures. A universal classification does not exist. The Galactic Federation classifies planets in at least 19 different categories. Very few of them have been mentioned in the games. Going by the way Federation Classes are referred to in Samus's logs, it would seem that the class of the planet determines the possibility the planet has of supporting life. It would seem that the smaller the number of the class, the less suitable it is to support life.

In Metroid Prime, Samus estimates that Tallon IV would have eventually turned into a Class XIII planet, a barren wasteland, by the Phazon radiation. A planet of this class has the mass of 5.1 trillion teratons, being slightly smaller than Earth (5.9 trillion teratons).[1]

Zebes is described to be a Class XIX planet, which is inhospitable to most bioforms. The planet's crust is primarily Urithic ore. Zebes has a the mass of 4.8 trillion teratons.[2]

When the Space Pirates first arrived on Tallon IV to harvest Phazon, they described the planet to be a Wanderer-class planet.[3] A Wanderer planet is not a rogue planet, such as Aether[4], but rather a small planet that is rich with life.