SR388 is a planet that was colonized by the Chozo. It has many violent native creatures, the worst of which were the X Parasites who killed everything like a plague. The Chozo created the Metroids to combat the X on the planet, but the Metroids were so successful they became the top of the food chain on SR388. The Chozo were driven out of the planet leaving only ruins. Much later in time, the Galactic Federation discovered the Metroids on the planet, starting the events of the Metroid series.

In Metroid II: Return of Samus and its remake Metroid: Samus Returns, Samus traveled to SR388 to exterminate the Metroid species due to the threat they posed to the galaxy. Once she accomplished this task by defeating the Queen Metroid, she found the Metroid Larva which hatched before her and mistook her for its mother. Rather than killing it, Samus took the creature with her. 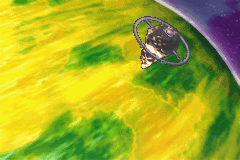 The B.S.L station in orbit around SR388 in Metroid Fusion

In Metroid Fusion, Samus led a Galactic Federation research team on the surface of SR388. While there, she encountered a mysterious, parasitic organism which entered her body. She later discovered that the organism was an X parasite, an organism which attacked living creatures and copied their DNA. The planet would later be destroyed when Samus changed the orbit of the research station to impact it in an attempt to eradicate the X parasites.