It has been requested that images, better images, or more images be added to this page or section.

Skulteras are somewhat large fish creatures that are native to Zebes. They can be very aggressive, but tend to keep to themselves unless threatened. Their body is very bony, with the overall skeletal system clearly visible. In Metroid: Other M, they will latch on to Samus, forcing her to shake them off. This makes them a major hindrance in water areas if she does not have the Gravity Suit. In Metroid Fusion, the X mimic the Skultera, also introducing a gold variety and a larger version of the creature.

Skulteras make their first appearance to Samus in Zebes's watery section, Maridia. It also appears in Crateria. The creatures are relatively simple and weak compared to later versions of Skulteras. It is possible that this can be attributed to the fact that its other appearances are under laboratory research.

Skulteras make their first 3D appearance aboard the Bottle Ship. The creatures, along with an array of other creatures, were used as test subjects for the Federation research teams. They are kept in Sector 1 (Biosphere), as the other sectors do not hold suitable living environments for the creatures. They can be found swimming within Biosphere's waters. If Samus enters their waters, they will attack her without hesitation. They are relatively resilient, but easy to defeat with any of Samus's weaponry nonetheless. If anything, the creatures serve as punishment for Samus falling in the water while trying to complete a task. 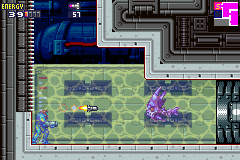 A large Skultera, formed from two X with Skultera DNA

Much like the case on the Bottle Ship, Biologic Space Labs researchers had brought Skultera aboard their research station orbiting SR388. These fish reside in the aquatic sector, Sector 4 (AQA). They swim about in the water waiting for something to attack, as is their aggressive nature. If Samus defeats small Skulteras, the X that mimicked them may be able to reform elsewhere. Additionally, if two X containing Skultera DNA combine, they can merge to a larger, much stronger version of Skulteras.

These large Skulteras cannot be damaged by Samus's Power Beam alone. To defeat tham, Samus has to charge a shot or fire Missiles at the creature. Their exterior seems to have been strengthened. Furthermore, the damage dealt by the creature increases drastically, they can now nearly take down a full Energy Tank by ramming into Samus.

The golden variety of Skulteras are, like other golden creatures in Fusion, rare and appear only in certain rooms. It is unknown why they are golden, though they are able to withstand more damage. It is possible that the X cause gold coloration as a genetic anomaly similar to albinism.

Their name seems to be referring to their compact bony body resembling a skull.