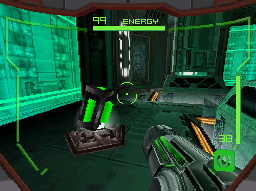 Universal Ammo is a type of ammo that is used by a variety of weapons, most notably the Affinity Weapons. It is often depicted as green, and individual ammo units appear as small green crystals that can be drawn in by the Charge Beam. There are also Universal Ammo Expansions, which increases a users ammo capacity by 30. The nature of the ammo, and how it is able to used in such a variety of different weapon systems, despite their drastic differances.