This article or section is in need of attention.

Please improve it by adding the latest Smash Bros. information.
This article has been flagged since February. 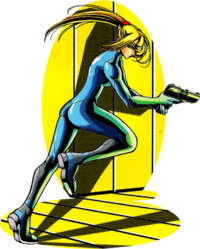 In Metroid: Zero Mission, Samus loses all of her abilities after fighting Mother Brain, leaving her stripped down to the Zero Suit and an Emergency Pistol. Equipped with only these most basic items, Samus manages to traverse the Space Pirate Mother Ship and reclaim her old abilities along with new ones (the Gravity Suit, Plasma Beam, and Space Jump). This expanded suit is commonly known as the Legendary Power Suit.

Zero Suit Samus aboard the Gunship

Zero Suit Samus is first shown in a cutscene in which Samus is being rehabilitated after her return from planet Zebes before beginning training. She appears in another cutscene after she is knocked unconscious by Adam Malkovich to prevent her from entering Sector Zero. After defeating Phantoon, Samus finds Adam's helmet and deactivates her Power Suit. A countdown is started, and Samus must escape the Bottle Ship clad only in her Zero Suit and armed only with the Paralyzer.

Zero Suit Samus is notably more agile but weaker than other characters. When she is obtained, her speed makes dodging and landing hits easy, but at the price of lowered offensive capabilities. Her recovery is excellent, but not the best, as those spots are occupied by flying characters.

Zero Suit Samus can be chosen at the start of a match on any mode by holding down the shield button (variable depending on the controller choice, Z on a default Nunchuck/Wii Remote set) and choosing "Start" (+ on the Nunchuck/Wii Remote set). Additionally, during a match of any sort (excluding the Subspace Emissary) Samus and Zero Suit Samus can switch freely between each other by repeatedly Up-taunting then Down-taunting rapidly. This is known as a Smash Taunt. [1]