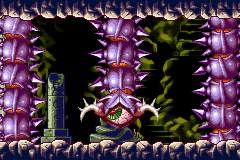 Deorem as it appeared in game

Deorem is a large worm creature found in Brinstar just after Samus obtains the Missiles. It has insect like pincers, and has spikes all along its body. It blocks the paths forward and back using sections of its body as walls.

Before Deorem appears, the ground begins to tremble at the cause of its digging. It remains hidden within the ceiling until Samus is close enough for it to trap her by diving down.

After diving down, it comes up with its vulnerable eye open. At this time and any other time its eye is open, Samus can shoot Deorem's eyes with Missiles to damage it; this is the only way to damage Deorem. After this process is repeated a few times, it will vibrate in place, throwing spikes off that can be destroyed for health or Missiles. If Samus defeats it quickly, she will be given the Charge Beam, but if she takes too long, Deorem will escape to a different area to be fought again. Deorem's pincers around its eye deal more damage than any other type of damage it deals, possibly because it is tougher in composition.

The outcome of battles against Deorem are negligible, that is, whether Samus destroys Deorem or not, she can complete her mission. Deorem is the first boss that can be fought in Metroid: Zero Mission, its fight, however, is completely optional as the Charge Beam is not necessary in the game.