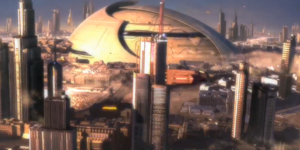 A Galactic Federation city, seen in the trailer of Metroid: Other M

The Galactic Federation is an intergalactic alliance engaged in war with the Space Pirates.