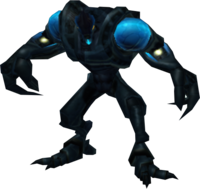 The Space Pirate Research Team Sclera was a subdivision of Science Team recognized in Metroid Prime for their discovery of Vertigo Phazon.

During the early stages of Project Helix, Space Pirate embryos were not maturing beyond infanthood without suffering psychotic breakdowns because the Phazon-infusion process was degenerating brain tissue. Sclera's experiments using Vertigo Phazon on Parasites were highly successful, however, and were implemented in experiments using Space Pirate DNA.[1] The resulting Elite Pirates, Phazon Elite, and Omega Pirate were among the Space Pirates' greatest scientific achievements.[2]

Access to Research Lab Aether, where many of these experiments took place, including the failed Experiment 7526, was eventually restricted exclusively to members of Team Sclera.[3]