Science Team is the branch of the Space Pirate organization responsible for the research and development of various technologies, most notably biotech research using Phazon and Metroid morphology. They report to the Space Pirate High Command, and Pirate Data often indicates that Command exerts tremendous pressure on Science Team to meet their predetermined timetable.[1] 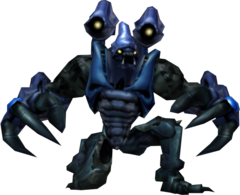 After detecting a massive energy spike in the Spiral Sector and conducting reconnaissance of Tallon IV,[2] a research headquarters and Science Team were established to study and experiment with the mutagen Phazon.[3][4] Initial tests on the indigenous Parasites were promising, resulting in Parasite Queens,[5] leading them to experiment on inanimate objects and even Space Pirate embryos.[6][7] Though initial experiments with Space Pirate embryos met with disaster, the discovery of Vertigo Phazon by Research Team Sclera stabilized the endeavor and led to the maturation of Elite Pirates, Phazon Elite, and the Omega Pirate.[8] Focus then turned to rectifying design flaws and studying Phazon Madness.[9][10]

A Metroid confined for study

Studies of Metroids were also top priority, and Phazon infusion testing began immediately after subjects were transported to the planet.[11] Studies of their biology revealed that Metroids had enormous potential as an energy source and as weapons,[12] though dissection studies were often inconclusive.[13]

Science Team also did extensive research on reverse-engineering Samus Aran's arsenal, including her Beam weapons, which resulted in the formation of Trooper Pirate forces, and her Morph Ball, which met with less success.[14] Science Team hypothesized that her gunship, which the Pirates were searching for, had a sophisticated cloaking device beyond their capabilities.[15]

They conducted research on thermal imaging as well, though the resulting equipment was eventually used against them,[16] and ran the Advanced Weapons Training program.[17]

Studies of the Chozo Artifacts, which they hypothesized were behind the spectral attacks on their forces,[18] fell to Science Team as well, though their linguistic analysts and language databases were ultimately inadequate to the task of deciphering the messages on the corresponding totems in the Artifact Temple.[1]

Science Team was responsible for the discovery of Phazon in the Dasha System.[19] Shortly after a base was set up on Aether, a Portal and an artifact were discovered within and Science Team managed to open the rift into Dark Aether.[20] Phazon extractions in Dark Aether began, and Science Team began creating powerful armor to defend against the toxic atmosphere and hostile native bioforms.[21]

Metroid studies continued on Aether, with focus on mass breeding and training of Metroids.[22] The inability of troops to tame the subjects led some to believe Science Team's decision was extremely unwise.[23]

When Dark Samus first arrived at the base, Science Team, unaware of her true nature as a sentient Phazon being, suggested she needed the Phazon she was stealing to power her suit.[24]