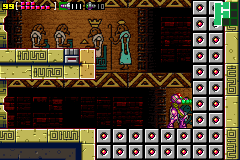 A large amount of Bomb Blocks in Metroid: Zero Mission

Bomb Blocks are a type of barrier found in Metroid: Zero Mission and Metroid Fusion. They can be cleared with a Bomb or a Power Bomb. A shot from the Paralyzer is also capable of destroying Bomb Blocks.

When in large amounts, if one block is destroyed, all blocks nearby will be destroyed as well. In Metroid Zero Mission, Samus can fire a Beam weapon to make them visible, this also occurs when Bomb Blocks are hit with a Zebesian's weapon's fire.

While not in the Metroid Prime series, blocks made from Sandstone or Talloric Alloy serve a similar purpose.