The Metroid Prime series is a subset of the Metroid series published by Nintendo and developed by Retro Studios. The Prime series consists of a main trilogy and two titles released on handheld systems: a spin-off game, which deviated from the trilogy storyline, and a retelling of the first Prime game in the form of a fast-paced pinball-based game. The Prime games were the first Metroid titles using a three-dimensional first-person perspective.

Chronologically, the Prime series falls between the events of Metroid/Metroid: Zero Mission and Metroid II: Return of Samus,[1] but the storyline is greatly self-contained and has little effect on future games.

The Prime series trilogy - Metroid Prime, Metroid Prime 2: Echoes, and Metroid Prime 3: Corruption - follows Samus Aran as she combats Space Pirates experimenting on Metroids with the recently discovered mutagenic substance known as Phazon. Samus must save several planets from the spread of Phazon, which has the ability to decimate entire ecosystems, while battling enemies who would use the power of Phazon for their own purposes. One such enemy is a mutated Metroid known as Metroid Prime, who absorbs DNA from Samus and becomes Dark Samus, and is the main antagonist of the series. Along the way Samus discovers the origin of all Phazon and must destroy it to save the galaxy.

Metroid Prime was released for the Nintendo GameCube in 2002 and was the first 3D Metroid game. The game is officially classified by Nintendo as a first-person adventure rather than a first-person shooter, though there are many combat sequences, because of the extensive exploration elements in the game. 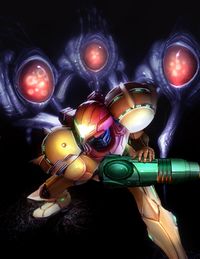 Samus follows the distress signal of a Space Pirate frigate to the planet Tallon IV, a former Chozo colony. On the surface she uncovers a series of Space Pirate operations involving a powerful substance known as Phazon, which was brought to the planet on the back of a strange meteor and was slowly devastating the local ecosystem. She dismantles the Space Pirate labs and mining operations and heads into the Impact Crater of the meteor, where she encounters an intensely-mutated Metroid known as Metroid Prime. Though Samus defeats the creature successfully, it manages to survive, and using DNA from the Phazon Suit it rips from her, Metroid Prime becomes the entity known as Dark Samus.

The successor to the highly-acclaimed first-person adventure Metroid Prime, Echoes is the second installment in the Prime series. It was released for the Nintendo Gamecube in 2004 and was the first Metroid game in the series to feature a multiplayer function. Metroid Prime 2: Echoes received a reputation for having punishing difficulty, but was still well-received.

In this installment, Samus is hired by the Galactic Federation to make contact with and render assistance to a squadron of Galactic Federation Marines that went missing in the Dasha region.[2] She follows the marines to the planet Aether, which had also been infected by Phazon after a meteor impact, creating a hellish mirror image known as Dark Aether infested with dark creatures called the Ing. Dark Samus and the Space Pirates also ventured to the planet, attracted by the Phazon there.

The marines she was sent to assist were dead before Samus arrived. She makes contact with the local people, known as the Luminoth, and uses Portals that connect the two dimensions on the planet to repel the Ing, as well as the Space Pirates who were mining Phazon on the planet and experimenting on Tallon Metroids. She manages to destroy the Ing presence, collapse Dark Aether, and seems to destroy Dark Samus as well. But the threat of Phazon still exists. 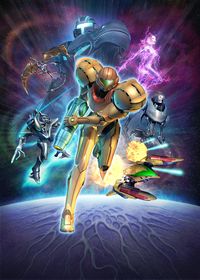 The final game in the Prime series and the sequel to Metroid Prime 2: Echoes, Corruption was the first Metroid game to be released for the Nintendo Wii in 2007. It used the revolutionary control scheme used in the New Play Control! versions of Metroid Prime and Metroid Prime 2: Echoes. The same controls were recycled for use in the Metroid Prime: Trilogy release. The game was very well received for its tight controls and gameplay, but received some criticism for its easy difficulty and lack of reliance on puzzles, and that the game was relatively short when compared to its predecessors.

During the events of Corruption, the Federation begins using Phazon as a weapon, and gives Samus this ability in the form of the PED Suit. These devices gradually corrupt the wearer, however, and Samus must complete her mission under constant threat of complete Phazon Corruption.

In the midst of her adventure the origin of all Phazon is revealed, a sentient planet called Phaaze. Leviathans, living Phazon-laced meteors, are birthed on Phaaze and launched towards other planets, which they infect with enough Phazon to eventually transform their targets into more sentient planets. Dark Samus takes control of Phaaze and a force of Space Pirates in an attempt to spread Phazon throughout the universe. Samus works closely with the Galactic Federation in this title to end the Phazon's corrupting effects on three Federation worlds: Norion, Elysia, and Bryyo.

Samus successfully defeats Dark Samus and destroys the planet Phaaze, eliminating all Phazon in the galaxy.

Trilogy is the Collector's Editon of all three Metroid Prime games in the series, with the first two being ported for the Nintendo Wii in 2009. The game borrowed the controls from the New Play Control! versions of the first two Metroid Prime titles released in Japan. It also has the Multiplayer of Metroid Prime 2: Echoes with the new controls as well. The game featured concept artwork and other extras to those who purchased the package. Metroid Prime Trilogy is one of the few titles on the Nintendo Channel with a Platimum rating, indicating its replay value and its gameplay elements. The trilogy is defined as a must-own of three of the most highly-acclaimed games for their systems. The game, like the others, had good reception and included all three games into one package. Its production, however, is discontinued.

It was later re-released as a digital download on the Wii U in January 2015.

A fourth main installment of the Metroid Prime series was announced during E3 2017. It is slated for release on the Nintendo Switch console. 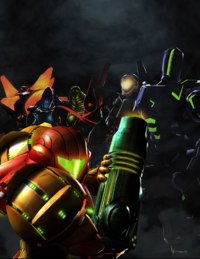 Hunters is a spinoff game in the Prime series, released in 2006 for the touch-screen capable handheld, the Nintendo DS. It is the first Metroid game ever to feature competitive online multiplayer support, and it pioneered the way for other online Nintendo DS titles to follow. It is also the first Metroid title ever to feature Full Motion Video (FMV) in its cutscenes.

Hunters deviates from the Trilogy storyline, recounting a mission in which Samus encounters neither Phazon nor the Metroid Prime creature. It takes place between the events of Metroid Prime and Metroid Prime 2: Echoes. After the Federation intercepts a telepathic message promising great power, they send Samus to retrieve the power for the Federation or destroy it before it can fall into enemy hands.[3] Several other Bounty Hunters also intercept the message and rush towards its point of origin to claim it for themselves. In the end, the message proves to be a trap, and the Bounty Hunters must fight together to survive.

Metroid Prime Pinball is a pinball-style title that was released in 2005 for the Nintendo DS. The game loosely follows the events of the original Metroid Prime, retaining many of its thematic and graphic elements. Samus's Morph Ball acts as the pinball. She can progress through various stages resembling all but the Chozo Ruins area from Metroid Prime and must defeat bosses along the way.

Metroid Prime: Federation Force is a multiplayer spinoff game and focuses primarily on a team of Galactic Federation Marines as they complete a variety of missions. The game comes bundled with Metroid Prime: Blast Ball, a 3-on-3 sci-fi sport in the Metroid universe.