From Metroid Wiki
(Redirected from Famicom)
Jump to navigationJump to search 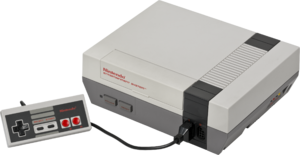 The NES and two controllers.

The Nintendo Entertainment System, also known as the NES, is Nintendo's first home console. It is known as the Famicom, short for Family Computer, in Japan and other parts of Asia (cartridges differ in appearance, and the controllers are attached to the system). Some of its games have been rereleased on the Virtual Console. Many series have started with this 8-bit system, and many future games have been inspired by the console. A huge improvement over the Atari 2600, the NES is responsible for ending the video game crash of 1983. Its successor is the Super Nintendo Entertainment System.

Many game series have begun on the NES. Its most popular titles are: