Mini Kraid, referred to as "Sclayd" in Super Metroid's game data,[citation needed] is a much weaker and sometimes smaller version of Kraid seen in Metroid and Super Metroid. 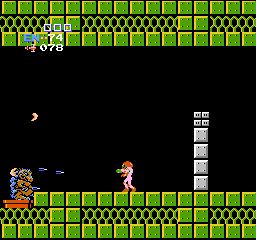 Mini-Kraid as he appears in Metroid.

There are several paths that lead to the actual Kraid, so the player may not even encounter Mini Kraid. He is a brown and blue version of the regular Kraid, but of equal size. He dies from a single Missile or at the slightest touch of the Screw Attack, though it constantly respawns like a regular enemy once Samus leaves the room and re-enters.

This impostor was potentially the source of much frustration for first-time players of Metroid, as the latter may have thought, after killing him, that they had achieved one of the requirements of the stone statues to access Tourian. As a result, the players would leave Mini-boss Hideout I prematurely to seek out the second requirement, Ridley, unknowingly leaving the authentic Kraid alive.

A few rooms before Kraid, Samus will encounter this smaller version of Kraid. Before she sees him, spikes will fly towards her, very similar to how Bowser attacks in Super Mario Bros., requiring quick dodging and Morph Ball maneuvers if players wanted to avoid any damage. As she progresses through the room, she will eventually come face to face with Mini Kraid.

Mini Kraid continually shoots spikes from his stomach and will occasionally spit rock-like projectiles from his mouth which will deal some damage. A few Missiles or one Super Missile will easily kill Mini Kraid. He will respawn once Samus re-enters the room.

Kraid in Metroid was approximately the same size as Super Metroid's Mini-Kraid, and fought much like the latter, leading players to believe they were fighting the real Kraid when Super Metroid was first released. However, upon defeating this fake Kraid, nothing happens, though one of the next rooms contains the much larger, authentic Kraid.