Kraid is a large reptilian creature and the most prominent Space Pirate aside from Ridley and Mother Brain. He attacks by firing projectiles from his abdomen and claws. His lair is in the Depths of Brinstar.

In Kraid's original appearance, he is far smaller than in the future games and his entire body is vulnerable. Samus obtains a large expansion of Missiles after Kraid is defeated.

Kraid returns in both Metroid: Zero Mission and Super Metroid in a much larger, two-screen tall form. Kraid can spew rocks from his mouth and fires giant claws from the three holes on his belly, which act as platforms. Kraid can also throw his sharp claws from his fingertips. Samus defeats him by firing Missiles, Super Missiles, or blasts from the Charge Beam directly into his mouth.

In Zero Mission, Samus obtains the Speed Booster for defeating Kraid. In Super Metroid, the Varia Suit is obtained.

Two rooms before fighting Kraid, a much smaller version of Kraid, known popularly as Mini Kraid, is fought. Mini Kraid is much weaker than the original Kraid but will yield plenty of Power-Ups.

Kraid was planned to be in the original Metroid Prime in his section of the Phazon Mines called Meta Kraid. He was shown with blue Phazon veins running up his abdomen and a metal guard on his head. However, due to time restraints, he never made it into the final version of the game.[1] 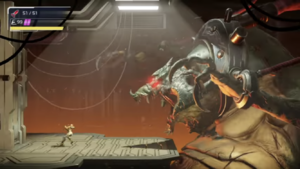 Kraid reappears as a boss in Metroid Dread after 27 years of not appearing in any mainline Metroid games. His appearance most resembles his look in Super Metroid with some differences including a visible neck, as well as the spikes across his abdomen are missing and have been replaced with purple blemishes and large holes. He is also chained to the wall and ceiling near him.

Kraid also appears in the Metroid Manga. Samus, at first, has a considerable amount of trouble defeating the powerful Kraid. Samus manages to defeat Kraid with the help of the Morph Ball Bomb upgrade supplied by Adam Malkovich. Although his appearance is relatively brief, it is significant in that it marks the first and only time Samus uses her Morph Ball Bombs in the manga.

An animatronic robot in Kraid's likeness appears in the Wii U title Nintendo Land as a boss in missions 10, 24, and 30. His head also appears as a prop the player can receive for their Nintendo Land Plaza