Super Metroid is the third game in the Metroid series and is the sequel to Metroid II: Return of Samus. In it, Samus answers a distress call at the Space Colony Ceres. She finds the station deserted, and the researchers dead. When she locates the Metroid Hatchling they were studying, Ridley abducts it and Samus gives chase.

Super Metroid improved on the formula established in Metroid and Metroid II: Return of Samus.

After Samus completed her mission and eradicated the entire Metroid population on SR388 as commanded by the Galactic Federation (sans the Metroid Hatchling, which she nicknamed "Baby"), she brought the Hatchling to the Ceres Space Colony for research. However, shortly after she left, she received a distress signal from the Station and returned to investigate.

When Samus arrives at the Space Science Academy where the Baby was being studied, she finds all the scientists slaughtered and the containment unit that held the Baby missing. Upon further exploration of the Station, she finds the Baby in a small capsule. As she approaches, Ridley appears and grabs the capsule. After a brief battle, Samus repels Ridley, and he activates a self-destruct sequence to destroy Ceres.

After escaping the explosion, Ridley flees to Zebes, and Samus goes after him.

Ridley roars at Samus on the Ceres Space Colony

Samus lands on Zebes, explores the surface, known as Crateria, and heads deeper into the planet. She finds that the old base of Tourian, which was destroyed after Samus defeated Mother Brain during her last visit, has been completely rebuilt, and Space Pirates have resurfaced their activities on Zebes. Samus heads deeper still back into Brinstar to explore, and upon returning, she finds Zebesians all over the rebuilt Tourian base. As Samus moves farther along, she unknowingly finds the entrance to the "new" Tourian, which is blocked by golden statues of Kraid, Ridley, Draygon, and Phantoon, all of which shine with gemstones that only vanish once Samus has defeated the respective bosses in their domains. 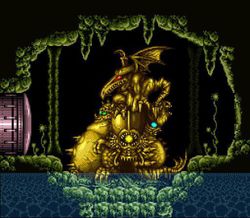 The Golden Statues that block the entrance to "new' Tourian

Samus sets out to reclaim her original upgrades from Metroid as well as some new ones that help her along her way. Numerous enemies bar her way to find the four guardians. She encounters Kraid, who was one of the guardians of "old" Tourian and has rebuilt his lair, which takes up a large part of Brinstar, and defeats him to claim the Varia Suit as her own. She then makes her way to the Wrecked Ship and finds Phantoon, who has shut off the power supply to the ship, making progress impossible until she defeats him. Afterward, she takes the Gravity Suit from a storage room in the Ship. After making her way through the Wrecked Ship and its mazes, she finds her way into the submerged Space Pirate research facility in Maridia.

After moving through Maridia, Samus finds many more upgrades and makes her way to Ridley's Lair in Norfair, where she also finds the Baby's broken capsule. Along the way, Samus encounters the Mochtroids, the products of the Pirates' failed experiment to clone Metroids for use as bioweapons. She annihilates them and continues her quest to make her way into "new" Tourian. 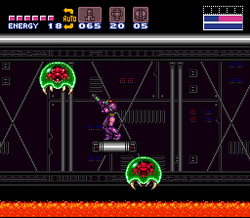 After defeating all the guardians, Samus sets off to return to "new" Tourian's gateway. She enters the facility and finds real Metroids that attack her on sight. After delving deep into Tourian, she annihilates all of the Metroids and nearly reaches the end of the facility when she enters a room and encounters a massive Metroid, much larger than any Metroid she has ever seen. After draining the energy of a few creatures in the room, the Metroid moves in Samus and begins draining her energy.

The Baby after it nearly kills Samus

It was the Baby. By the time it recognizes Samus as its mother, Samus only has one unit of health left. The Baby feels disgraced for attacking its adopted mother and flies off shrieking. Samus, barely able to even stand, finds an energy recharge station and re-energizes herself.

She continues on and confronts Mother Brain yet again. She destroys Mother Brain's control unit, and the machine appears to be defeated, but it is revealed to be housed in a separate room and attaches itself to a giant, bipedal mechanical body that it can control freely, offering many more offensive armaments than the previous phase of the fight. After dealing damage to it, Samus is overpowered by Mother Brain's Hyper Beam attack. As Samus in on the verge of death, Mother Brain rears back to deliver the death blow but is stopped by the Baby, who rushes in and absorbs its energy. After apparently depleting Mother Brain's energy, the Baby releases its hold on Mother Brain, and it falls to the floor, gray and lifeless, the same fate of the creatures it attacked earlier in Tourian. The Baby then attaches to Samus, who feared death from her own adopted child, but the Baby did not take the last of Samus' energy. It instead delivered the energy it stole from Mother Brain into Samus' body, completely recharging Samus's energy and endowing additional powers.

During this time, Mother Brain miraculously recovers its energy and commences to attack the Baby. After releasing Samus, the Baby rears back for one final attack, intent on destroying Mother Brain, but Mother Brain delivers a deathblow and kills the Baby, destroying the last Metroid specimen and rendering the race extinct. 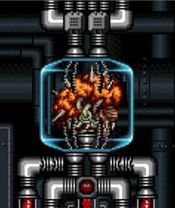 Mother Brain in its control unit 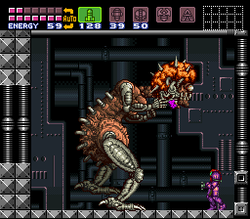 Mother Brain in its bipedal form

Samus, whose form is pulsating with the energy given to her by the Baby, knows she possesses the power to defeat Mother Brain. A fierce, final battle ensues, and Samus easily defeats Mother Brain using the Hyper Beam, destroying her once and for all.

After exploding, a countdown begins that results in Tourian exploding. Racing for her life, Samus runs through hidden passages in Tourian and Crateria. Along the way, she rescues three Etecoons and a Dachora that she met in Brinstar as she makes her way back to her Gunship. As she leaves Zebes, home of the Chozo and the place where Samus was raised until she was mature enough to venture off on her own, the planet explodes with violent force and nothing is left behind.

In Metroid: Other M, which immediately follows the events of Super Metroid, Samus experiences a sense of longing for the Baby, and she is reminded of it often, particularly after receiving the "Baby's Cry" distress signal from the Bottle Ship. DNA from her Power Suit is later used to clone Metroids (including a Queen Metroid) and Ridley.

After the release of the original Metroid, director Yoshio Sakamoto sat out on the development of its direct sequel, Metroid II: Return of Samus. Instead, after the release of the SNES, he culled members from Nintendo R&D1 and Intelligent Systems to begin work on the third game in the series, which would become Super Metroid.

Super Metroid is a side-scrolling action game containing elements of both platformers and shooters. The game takes place over a massive, interconnected world; in order to progress, Samus must explore and acquire new abilities that will grant her further access to new areas, such as her Morph Ball and High Jump Boots.

The controls are completely customizable, allowing the player to assign any function to any button to their desire. These functions include jumping, firing, dashing, aiming diagonally up or down, and selecting among Missiles, Super Missiles, Power Bombs, the Grappling Beam, and the X-Ray Scope. Of these, aiming diagonally up or down can be disabled depending on the button configuration used. Also, beams can be obtained to have different effects, and can be stacked for even more different effects.

Super Metroid was released on the Wii Shop Channel downloadable for 800 Wii points as a Virtual Console game. The game has also been released on the Wii U eShop Virtual Console, as a part of the Wii U trial campaign, celebrating the 30th anniversary of the Nintendo Entertainment System (NES) on July 15, 2013, in which Nintendo release a Virtual Console title each month at a 30-day special reduced price of 30 cents, Super Metroid was launched and special reduced from Wednesday, June 15 to Thursday, July 13. After finishing the 30-day, the game cost $7.99. As of now, it is available to play on the Nintendo Switch, with the Super Nintendo Entertainment System service exclusive to Nintendo Switch Online members.