The Fusion Suit is the result of drastic alterations made to Samus Aran's Power Suit during the removal of parts infected by the X parasite and Samus is injected with Vaccine "Metroid". "Fusion" is a reference to Samus's fusion with Metroid cells. The Fusion Suit is Samus's starring suit in Metroid Fusion, replacing the Power Suit in function. 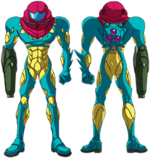 The Fusion Suit is less bulky then the original Power Suit, allowing Samus to climb on ledges without the Power Grip. The disadvantage to this is that the suit is much weaker than the original Power Suit. Also, with Samus Aran's new Metroid DNA, Samus inherits the Metroid's vulnerability to cold, making her more vulnerable to ice attacks and unable to use the Ice Beam. Additionally, the Charge Beam functions differently; instead of firing one large burst of energy, it now fires medium sized energy waves. The number of energy waves fired increases with the strength of the weapon. The most important boon of the Fusion Suit is Samus's exclusive immunity to the X, allowing her to absorb them and gain their energy and abilities rather than be damaged by them.