Metroids are parasitic, energy-siphoning lifeforms created by the Chozo. They were bioengineered to combat an even more menacing parasitic organism native to SR388, the X. The Metroid series, named after these lifeforms, focuses primarily on the missions of Samus Aran and her interactions with the Metroids species, which share some elements of her own origins and seem intrinsically linked with her. 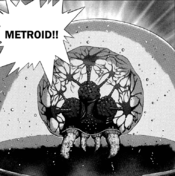 The first Metroid is unveiled

The Metroids were first created through a collaboration between the Chozo and Mother Brain to combat a dangerous parasitic lifeform discovered on SR388, called the X Parasites, which the Chozo feared might one day infiltrate the Galactic Federation.[1] They were so named because the word "Metroid" means ultimate warrior in Chozo.[2] They were so successful at hunting the X, they drove them close to extinction. At some point, the Metroids apparently grew feral, eventually topping the food chain on SR388 and devastating the local ecosystem.[3] They established their own life cycle, and may have even caused the Chozo to leave the planet.

Later, the Galactic Federation discovered the Metroid on SR388, and several specimens were acquired for research. On the way back to headquarters, however, the Federation ship was ambushed by Space Pirates. Recognizing the military potential, the Pirates took the Metroids to Zebes.[4] The Federation, in turn, ordered Samus Aran to eradicate all Metroids on Zebes, a mission that she completed during the events of Metroid and Metroid: Zero Mission.[5] Though Samus was successful in destroying the Metroid population and dismantling the Space Pirate operations on the planet, a number of Space Pirates escaped, taking a number of Metroids with them.

A Tallon Metroid in captivity

After the fall of Zebes, two contingents of Space Pirates set out on separate missions: one to rebuild Zebes and resuscitate Mother Brain, Ridley, and Kraid, and the other to find a suitable power source, which manifested itself in the Phazon emanating from Tallon IV.[6][7] Using Phazon's mutagenic properties, the Space Pirates began experimenting on local lifeforms and the Metroids they had brought with them, resulting in Tallon Metroids. These Metroids differed somewhat from the originals created by the Chozo, and other mutated forms, including Hunter Metroids and Fission Metroids, were created. 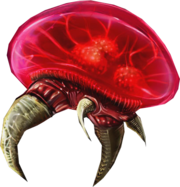 In an unexpected twist, the meteor that infected Tallon IV with Phazon attracted a Metroid to be its guardian.[8] This drastically mutated Metroid, known as Metroid Prime, is engaged in battle by Samus after she overthrows the Space Pirate operations on the planet. Though she is victorious, Metroid Prime manages to survive and using some of her DNA is reborn as Dark Samus.

The Space Pirates quickly set up Metroid breeding operations again, this time on planet Aether, where Tallon Metroids with red membranes and Infant Tallon Metroids, as well as Dark Tallon Metroids possessed by violent creatures known as Ing, are encountered. Samus again intervenes and removes the Space Pirate and Metroid presence while battling the Metroid known as Dark Samus.

During the events of Metroid Prime 3: Corruption, Samus finally engages in a final conflict with Dark Samus as well as several other Phazon-mutated variants of Metroids she encounters along the way. She destroys the living planet known as Phaaze, and all Phazon in the galaxy is apparently eliminated, effectively exterminating all Phazon-mutated strains of Metroids.

Some time later, the Federation orders Samus to eradicate the Metroids on SR388, where the Chozo originally unleashed them. After destroying the Metroid population, which had developed several stages of maturity including Alpha Metroids, Gamma Metroids, Zeta Metroids, and Omega Metroids, and the ability to reproduce through egg-laying, she battled and destroyed the Queen Metroid. A single baby Metroid hatched shortly after the Queen was destroyed and mistook Samus for its mother. Samus decided to spare it and took it to Galactic Federation researchers at Ceres Space Colony.[9] In so doing, Samus unintentionally wiped out the only predator of the deadly X Parasites.

Research began immediately, and Federation scientists discovered that the energy-producing properties of Metroids could benefit humankind, suggesting that Metroids may have originally beenc reated for peaceful purposes.[10] But shortly after Samus left the colony, it fell victim to a Space Pirate raid. Samus received their distress call and returned to the station, where she witnessed Ridley escaping with the Hatchling.[11] She pursued them to Zebes, where she entered the rebuilt Space Pirate labyrinth controlled by Mother Brain. Inside, Samus encountered early attempts by Space Pirates to create clones of Metroids, called Mochtroids, but these were ultimately far weaker than the originals.

After making her way into the new Tourian, she destroyed the successfully cloned Metroids gathered there and eventually encountered the Hatchling, this time far larger. It drained Samus's energy, leaving it at critical levels, before recognizing her and leaving. Just as Mother Brain was about to kill Samus, however, the Hatchling returned and used its energy-producing abilities to transfer energy to Samus, recharging her. In that instant, the Hatchling was destroyed by Mother Brain, sacrificing itself to save Samus in this final act, perhaps demonstrating the beneficial abilities the scientists had discovered. With the Hatchling destroyed, it seemed the Metroid species was extinct. But unbeknownst to Samus, the Galactic Federation was clandestinely performing experiments on Metroids in captivity.

Following the events of Super Metroid, Samus, still in mourning over the Hatchling, encounters a distress call from the Federation Bottle Ship. While aboard, Samus discovers that the Federation had created clones of dangerous lifeforms she had encountered for use as bioweapons using organic particles affixed to her Power Suit, including Metroids. Suitable environments for these specimens were also created, including a replica of Tourian called Sector Zero where the Metroids were genetically engineered. The Federation also replicated an artificial intelligence to control the Metroids - a second Mother Brain. But the specimens became too aggressive and the project was endangered.

Though Samus is successful in her efforts to suppress the creatures they had created, including a Queen Metroid, the situation gets out of hand and her commanding officer, Adam Malkovitch, decides to separate Sector Zero from the rest of the Bottle Ship and initiate its self-destruct sequence. Later, the Federation orders the entire Bottle Ship destroyed and the self-destruct is initiated. But before its destruction, several tissue samples are salvaged to continue experimentation elsewhere.

Metroids in the Secret Laboratories

Around this time the Federation hired Biologic Space Labs to study the restructuring ecosystem of SR388 and hired Samus to render field assistance in the harsh environment.[12] While Samus was on SR388, she was attacked by an X parasite, a lifeform previously unknown to the Federation and now rampant without the Metroid presence, that infected her. The Federation saved her life with a vaccine made from Metroid DNA that had been acquired from the Hatchling. It allowed her to absorb any free-floating X but also made her inherit the Metroids' vulnerability to extreme cold, turning her into a sort of a hybrid.[13]

Samus begins the arduous task of eradicating the X population from the infested Biologic Space Labs research station, which had housed many specimens from SR388 and remnants of the Bottle Ship experiments. As she progresses, she learns that the Federation had started a Metroid breeding program on board and has captive larval, Alpha, Gamma, and Zeta Metroids in their secret labs. Samus moves the station in the path of SR388 in an attempt to eradicate all X aboard the station, but before she could make it to her ship she was attacked by an enhanced Omega Metroid that was immune to all her weapons. Before the Metroid could finish Samus off, an X copy of Samus attacked the Metroid but was quickly defeated. Samus then absorbed the defeated X, regaining her Ice Beam ability which she used to destroy the Omega Metroid.

Once the station impacted SR388, the remaining Metroids aboard the station were destroyed. With the Metroid population supposedly extinct, Samus, with Metroid DNA integrated into her genetic code, is the last Metroid - the last "ultimate warrior."

Various stages of Metroid growth as seen in Metroid II: Return of Samus

The most commonly encountered form of Metroids are the juveniles. Their bodies are covered by a thick, translucent membrane and four talon-shaped claws. The outer claws are used to grip their prey while the inner claws drain the energy. They are featured in Metroid, Metroid II, Super Metroid, and Metroid Fusion.

After molting, juveniles become Alpha Metroid. They are no longer capable of latching onto their prey, they instead attack by dive bombing. They are exclusive to Metroid II and Metroid Fusion.

After further mutations Metroids grow larger and gain the ability to fire lighting bolts. Gamma Metroids will also ram their prey. They are exclusive to Metroid II and Metroid Fusion.

Zeta Metroids are even larger, they will fire projectiles and also resort to ramming. They are exclusive to Metroid II and Metroid Fusion.

Omega Metroids are one of the most powerful forms of Metroids. They attack by firing projectiles as well as ramming. The Omega Metroid that Samus encountered on the Biologic Space Labs research station also attacked by slashing. They surface in Metroid II and Metroid Fusion.

The Queen Metroid is the final stage in a normal Metroid's life cycle. They attack by ramming, biting, firing projectiles, and large blasts of energy. Samus encounters a Queen in Metroid II and in Metroid: Other M.

Mochtroids are weaker, cloned Metroids. While they can drain energy, they are incapable of latching on to their prey. They are featured only in Super Metroid.

Infant Tallon Metroids are capable of rapid growth by feeding directly on Phazon. They will only attack by ramming. They are only in Metroid Prime 2.

Tallon Metroids are Metroids that developed on Tallon IV. They are similar to regular juvenile Metroids but require less firepower to destroy. The variety that were brought to Aether have a red epidermis.

Dark Tallon Metroids are Metroids taken over by the Ing, they attack in the same way as an adolescent Metroid. They are only available in Metroid Prime 2's Dark Aether.

Hunter Metroids are adolescent Metroids capable of draining their preys' energy at a distance with an energy siphon tentacle. They may also attack by ramming. They are only found in Metroid Prime.

Fission Metroids are adolescent Metroids that are capable of splitting into multiple Metroids. They can only be found in Metroid Prime.

Hopping Metroids are ground-based Metroids that unusually have legs. They can only be found in Metroid Prime 3: Corruption.

Metroid Prime is a Metroid that has been extremely mutated by Phazon. It is far more powerful than a standard Metroid. It uses a variety of attacks. It is the final boss of Metroid Prime, the game which is named after it.

"These alien creatures float around and then try to clamp down on you with their sharp fangs. Quickly struggle to break free from their grasp."