A Landing Site is an area where a ship can be landed. The location of Landing Sites vary between games. While they may be improvised, such as Echoes' Landing Site, there are designated Landing Sites in certain areas, particularly Corruption's various Landing Sites. 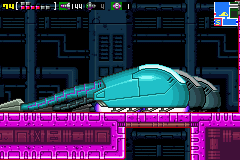 Metroid: Zero Mission sports Samus's first ship landing for a mission. The does not appear to be a designated landing area. In fact, it doesn't seem to be anything beyond a large open space; this, however, makes it suitable for a landing area. Samus lands on this area when she arrives on Zebes. She returns to it and escapes in her ship as the planet begins to explode.

Samus later makes a crash landing again on Zebes's surface after her gunship is severely damaged by Zebesians.

Samus first lands her ship on Frigate Orpheon's Exterior Docking Hangar. The Hangar may have been used by Space Pirates to land their ships; however, as Samus lands there are no other ships present. This may have been due to the Pirates' evacuation of Orpheon. After Samus lands her ship, it is not accessible to her until she is escaping Orpheon.

After chasing Meta Ridley down into Tallon IV, Samus manages to land her ship in the grassy Tallon Overworld. The room where she lands her room, like most other landing sites in the Prime series, is known simply as Landing Site. Samus seems to have picked a large open space for easy landing and taking off maneuvers. No other vehicles are known to have landed here.

Samus's ship lands nowhere else in the events during Metroid Prime, but it does help her escape the Impact Crater through the Artifact Temple.