Mother Brain (occasionally referred to as Mother) is a recurring character in the Metroid series. It[2] is featured in Metroid, Metroid: Zero Mission, Super Metroid and Metroid: Other M and most importantly in the Metroid manga.[3] According to Metroid director and co-creator Yoshio Sakamoto, Mother Brain was an indispensable artificial intelligence that served as the center of the advanced Chozo civilization. However, as an extremely superior standalone intelligence, it sprouted dangerous thoughts eventually going berserk.[4]

When the Space Pirates later took over Zebes, where the Chozo kept Mother Brain, it became the leader of the entire Space Pirate organization, using its telepathic abilities. Mother Brain is responsible for the spread of Metroids.

Mother Brain, introduced as a benevolent supercomputer, was created by the Chozo to oversee planet Zebes and to bring species of the Milky Way to harmony.[2][3] As revealed in the Iono Feria incident and during the approach of the Space Pirates, Mother Brain assesses dangers and suggests resolutions, and is capable of detecting threats in orbit.[5][6]

When the Chozo first reveal an infant Samus to Mother Brain, it assesses that her human body will not be able to withstand the harsh environment of Zebes for more than a few days,[7] and so the Chozo infuse Samus with their DNA.[8] Later, Mother Brain modified the Chozo battlesuit technology to create Samus's Power Suit.[9] 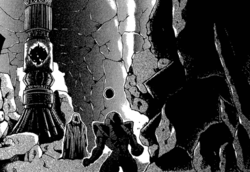 Mother Brain was also involved in overseeing the development of the Metroids, created to defeat the X infestation threatening the galaxy. It regularly gave the Chozo reports concerning the progress of the X extermination on SR388.[10] Upon revealing the completed Metroids to other Chozo, however, Space Pirates attacked Zebes and subsequently expelled the Chozo from the planet. Mother Brain assumed control of the Space Pirates, who it realized were genetically predisposed to following the orders of a powerful leader.[11][12]

The supercomputer's purpose, to unify the species of the galaxy, had backfired. Mother Brain now sought to bring order to the universe itself, through whatever means was necessary.[13] Thus, the Chozo staged an elaborate deception in which Gray Voice seemed to side with Mother Brain and her army of Space Pirates. When the moment was right, he betrayed them and caused significant damage before being killed by Ridley. Meanwhile, Samus and the other Chozo escaped.

Years later, Samus returns to Zebes. The geography and ecosystem of the planet had changed significantly, all to further Mother Brain's plans for universal domination.[14] After fighting her way to Tourian, defeating Kraid and Ridley along the way, Samus finds Mother Brain surrounded by Metroids. The manga ends with the battle ensuing, in which Samus will be victorious and Mother Brain will rebuild itself as depicted in Super Metroid.

Mother Brain's Zero Mission appearance is identical to her appearance in Metroid. The room is still full with turrets and Rinkas and there is still a classic setup with Mother Brain at the left of the room in her Zebetite shield. Samus can now break the shield with Missiles or Super Missiles. There is additionally a lot of lava around the floor and a much larger area around. There are three platforms which Samus can use to stand on and attack Mother Brain from. Once Mother Brain is destroyed, Samus must escape to her gunship in time. Unlike Metroid, Samus can return to Mother Brain's chamber after receiving the Legendary Power Suit. Even with Samus's Gravity Suit, the strongest suit available in the game, Samus still receives damage if she touches residual acid left behind in Mother Brain's chamber. The only reason to return to Tourian after acquiring the Legendary Power Suit is to find a couple of additional Suit Expansions. 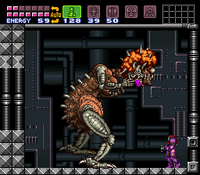 In Super Metroid, Mother Brain first appears identical to its previous incarnation. After destroying the Zebetite shield and delivering significant damage, Mother Brain transforms into an extremely powerful bipedal being. In this form, Mother Brain also possesses a potent Hyper Beam that drains massive amounts of energy and ammunition and leaves Samus paralyzed. If Samus manages to survive the onslaught, the infant Metroid will appear and attack Mother Brain, draining its energy and returning it to Samus. The hatchling attempts to protect Samus from further damage but is destroyed by Mother Brain. The hatchling's destruction bestows the power of the Hyper Beam to Samus, who then uses it to destroy Mother Brain.

It is actually impossible for Samus to defeat Mother Brain; only the appearance of the infant Metroid allows Samus to emerge victorious.

Mother Brain appears in one of Samus's many flashbacks. In this specific flashback, Samus is reliving her climactic encounter with Mother on her second mission to Zebes. The Metroid Hatchling heals Samus and then is destroyed by a Hyper Beam above her head.

During the events of Other M, Galactic Federation scientists develop a program based on Mother's artificial intelligence and create an android known as MB. MB develops Mother's consciousness and becomes violent, stirring the creatures aboard the Bottle Ship into a frenzy, which forces Madeline Bergman to send out the distress signal that leads Samus to the facility, a much different version of events than is told by MB, who assumes Bergman's identity upon meeting Samus. MB is eventually killed through the combined efforts of Bergman and Galactic Federation troops.

"Mother Brain will fire ring-shaped projectiles called Rinkas from off-screen. These are energy based, so they can be absorbed or reflected."

"It's totally fine to use Mother Brain to shield yourself from the attacks of your rivals."

"Attack Mother Brain to defeat her! The glass around her will shatter after she fires lasers—that's your chance to strike!"

"Mother Brain will send colorful lasers shooting up and down the screen. They can't be absorbed or reflected, so you'll have to just avoid them!"