The Docking Bays are a section in the B.S.L research station's Main Deck. The comparatively small area seems to be dedicated for external ship landings, there are only two visible openings for ships. Samus lands her ship in the Docking Bays where it stays until the Dachora and Etecoons move it away from danger. 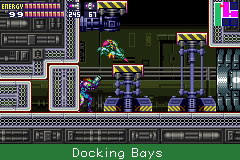 The Kihunter in the Docking Bays

The area is connected to the Main Deck and the Reactor Silo. Though there usually are no inhabitants in the Docking Bays, an X-infected Kihunter appears once they begin to hatch. An Omega Metroid also appears as Samus attempts to escape an imminent destruction. Samus manages to defeat it with the power of her former suit via an SA-X's powerup.