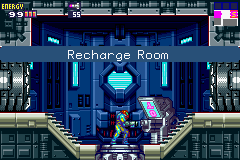 Samus recharging ammo and energy in a Recharge Station

Recharge Rooms are rooms appearing in Metroid Fusion. These rooms appear as the third room inside each of the Sectors on the Biologic Space Labs research station.

These rooms allow Samus and presumably the Biologic Space Labs researchers to recharge suit shielding and weapon ammunition. Within these rooms, there is a console that Samus can use by inserting her Arm Cannon within it. Through an unknown method, the console recharges Samus completely. The function of Recharge Rooms is taken care of by Samus's gunship in most cases, though Metroid II uses Missile Batteries and Big Energy Balls, the Primes use Save Stations, and Metroid lacks the ability to recharge efficiently completely.

It is unknown precisely why B.S.L researchers had so many Recharge Stations. It is likely that they were placed merely as a precaution, as the researchers would have little need to discharge weaponry to waste ammo considering the creatures aboard the station were held securely.