Saturnines are blue, iridescent mushrooms encountered on Tallon IV. They prefer dark areas and can be found in caves and overgrown areas in Tallon Overworld. Saturnines tend to grow on rock walls or tree branches rather than on the dirt itself, and come in a variety of shapes and sizes. 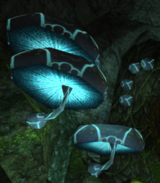 Saturnines in the Overgrown Cavern

Several oversized Saturnines, some increased in amounts as large as 400%,[1] act as platforms in Phazon Mines in Metroid Quarantine A, Fungal Hall A and B, and in the Fungal Hall Access. These Saturnine specimens have been drastically mutated by Phazon exposure. Deliberate experimentation on Saturnines with Phazon was conducted by Space Pirates while they searched for viable rations for their Phazon-enhanced units.[2] Later, Phazon-infused Saturnines were used in the Elite Nutrient Mix fed to Elite Pirates, replacing deca-triticale.[3]

Small, green insects sometimes hover around these fungi, possibly indicating that they are a natural food source for them.