The Lock-On ability is a technique used by bounty hunter Samus Aran. She can use this technique with any of her Visors, though it is most commonly used with the Combat Visor. A crucial element of the Metroid Prime games, it allows Samus to remain aimed at targets through many conditions. In Metroid: Other M, Samus automatically locks-on to her nearest target; shooting will cause her to shoot directly at said target. In first-person mode, Samus can choose which enemy to lock-on to. Samus must lock on to Grapple Points in the Prime games and Other M to Grapple onto them. 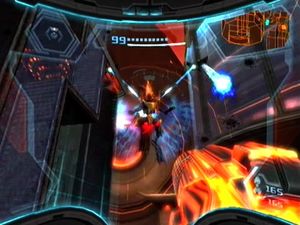 Samus locked on to an Assault Aerotrooper

It allows Samus to remain aimed at her target, even if she or it is moving. Samus can strafe only while locked on to a target. Strafing allows Samus to sidestep very quickly, allowing her to dodge attacks while keeping the target in her sights. Strafing makes it easier for her Targeting Reticule to remain on the target even if it moves behind an object or wall. Locking-on to a target can cause certain HUD systems to display on Samus's current Visor, such as the distance between Samus and the target, depending on the Visor equipped. Locking-on and shooting a Missile, charged Wave Beam, charged Annihilator Beam, or Seeker Missile will cause the Missile or beam to home into and follow the target, even if it moves away. This is not to say, however, that the attack will hit the target in every case, as certain targets are able to evade Samus's homing attacks by quickly moving away.

Samus's Seeker Missile, because of its ability to lock-on to up to five targets, enables the hunter to freely view her surroundings instead of looking directly at an enemy when attacking.

Targets with certain energy signatures can only be targeted, sometimes only even seen, with the Thermal Visor. The Thermal Visor can lock-on to hidden enemies such as Shadow Pirates and is especially crucial in defeating Thardus and Metroid Prime. Samus's X-Ray Visor enables her to lock-on to hidden enemies, such as Chozo Ghosts, Flickerbats, and Shadow Pirates. The X-Ray Visor is also required to defeat the Omega Pirate and the Metroid Prime. In Corruption, all enemies can be seen with or without the X-Ray Visor, but it can reveal weak points in Phazite-plated enemies. Berserker Knights, Pirate Commandos, Omega Ridley, Phazon Metroids, Metroid Hatchers, and Dark Samus all have weak points that only the X-Ray Visor can reveal. While locked-on to all but Dark Samus, the X-Ray Visor will zoom in on these weak points, coloring them red. Enemies with these weak points, except for Omega Ridley, can be killed with a single blow from the Nova Beam.

Echoes also holds an Echo Visor, a Visor working off the principle of echolocation. It seems to send a sound-based signal that is returned to the Visor, allowing Samus to detect targets not normally visible. This can be used to target invisible enemies and, more importantly, objects in the Echo Key Beam System.

Samus's Command Visor is significantly different from all other Visors. It is not particularly designed for fighting purposes, but it can still be used to attack. It is used to lock-on to certain icons with different functions. Depending on which icon Samus locks-on to, her ship can land, Grapple large objects, or perform a bomb run. Unlike with other Visors, Samus cannot lock-on to enemies or even shoot at them, as Samus can only offensively use her ship in certain areas. In large open rooms, however, there is a Ship Missile icon, allowing her to command her ship to drop Ship Missiles.