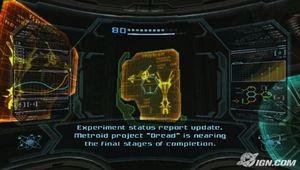 Metroid Dread, also called Metroid 5, is a 2D Metroid series game that released for the Nintendo Switch on October 8, 2021. The game is functionally similar to Metroid: Samus Returns, being developed by the same studio, Mercury Steam. Chronologically, the game is set after the events of Metroid Fusion, making Metroid Dread the latest entry in the Metroid timeline.[1]

Metroid Dread retells the story of the 2D Metroid games leading up to it, ending with Metroid Fusion. Now, Samus is dispatched to investigate by a currently unknown party and travels to ZDR. As the only being in the universe with immunity against the X Parasites, Samus seeks to uncover whether they truly still exist. Soon after arriving on ZDR, Samus encounters a hostile, living Chozo (who previously appeared in the Chozo Memories of Metroid: Samus Returns), who attacks her and steals her abilities. [2]

When Samus wakes up and explores the planet in search of a way back to her ship, Samus encounters the E.M.M.I. robots which were built by the Galactic Federation, have gone rogue and now seek to kill her. [3] As she makes her way through the planet, she encounters a second Chozo, who introduces himself as Quiet Robe of the Thoha tribe. He reveals that the Chozo who attacked Samus is Raven Beak, the leader of the Mawkin tribe. Raven Beak had murdered the Thoha of SR388 when he learned that they planned to destroy the planet in the hopes of eliminating the Metroids, as he sought to use them as a weapon to conquer the galaxy; Quiet Robe was the sole survivor, as only the Thoha could control the Metroids. His original goal was to bring the Metroids to ZDR, but the presence of an X among his soldiers and Samus' eradication of the Metroids forced him to change his plans- he had the E.M.M.I. units reprogrammed to hunt Samus and extract her Metroid DNA, which would allow him to clone an army of Metroids.

Quiet Robe is killed by one of Raven Beak's Robot Chozo Soldiers after opening a path further into ZDR, and Samus resolves to avenge him and end the treacherous Chozo's ambitions. During her travels, the X are released from their quarantine and Samus begins to manifest strange powers that let her drain the energy of other beings, just like a Metroid.

The computerized Adam Malkovich returns in this game as a provider of lore and story-related information. Samus is able to interface with him via Communication Rooms and get advice on her current situation.

Dread will conclude the main story arc of the Metroid series that began with the original game, of the connected fates of Samus and the Metroids.

The game plays similarly to Metroid: Samus Returns. Free Aim and Melee Counters return, as well the Charge Attack (a Screw Attack-like move that utilizes the Charge Beam), being able to turn invisible with a Phantom Cloak, and being able to magnetize Samus to certain surfaces and move around on them. The camera can also shift to behind Samus to allow a better look at her environment when using Free Aim.

The E.M.M.I.s are large robots that are alerted by sound. When one is nearby, any sounds Samus makes will alert it, as indicated by a yellow circle that shows around Samus when she moves. If an E.M.M.I. catches sight of Samus, it will charge after her, following her movements. Should Samus be caught, she has a chance to escape by pressing the X Button at the right time, but failure to do so will result in an instant Game Over. E.M.M.I.s cannot enter small spaces that the Morph Ball can get into, and they can be fooled by using the Phantom Cloak.

On February 9, 2022, an update was announced for Metroid Dread and was released the same day. It adds two new difficulties into the game: Rookie Mode and Dread Mode. The former allows Samus to receive more energy when healing, and the latter only allows Samus to get hit once before getting a Game Over. Rookie Mode is unlocked after the update has been installed; Dread mode is unlocked after the player completes Hard Mode.

An update released on April 7, 2022, was announced on the same day, introducing a Boss Rush Mode. This mode allows Samus to fight every boss in the game in a row. You can also unlock harder difficulties of Boss Rush from beating Dread Mode.

According to Game Informer, the game had "been in development" since 2005. For a period of time, the game's existence was only supported by rumors. In Metroid Prime 3: Corruption, one of Samus's scans hints that "Metroid Project "Dread" is nearing the final stages of completion".[4] Later, Nintendo stated they were not working on any 2D Metroid project for the DS, putting an end to the rumors.

In an interview about Metroid: Other M, producer Yoshio Sakamoto was asked if this was what became of "Project Dread". Sakamoto announced that the day may come when Dread will hit stores, but it is not the same game as Other M. [5]

At the 2010 Game Developers Conference, Sakamoto returned to the subject, "not denying" the rumors that Metroid Dread was still in development, but not committing to a release date, saying there's never been an official announcement.

Later that year, Yoshio Sakamoto confirmed that the game did exist at one point and stated that if he were to return to it, he would prefer to "reset the situation at once and start from scratch."[6] [7]

When asked by IGN whether Metroid: Samus Returns, the forthcoming remake of Metroid II: Return of Samus for Nintendo 3DS was linked to Dread, Sakamoto quickly shot down any connection, saying "I think it’s better to say that this is a remake, remastering of Metroid II, a powered-up version of that, and not something to do with the other project."[8] He did, however, indirectly confirm the earlier statement by the anonymous NST developer, about Dread having a dual screen setup with the Map and UI on the bottom screen, and gameplay on the top screen.[9] In a 2018 interview with Hobby Consolas, Sakamoto stated that the DS did not have the technical specifications to make the new Metroid game he had in mind, which he reiterated when Dread was finally announced. He also implied in the same interview that the next game would explain the Chozo Memories ending from Samus Returns.[10]

Much like the case with Metroid 64, any time Dread was mentioned prior to 2021, responses from game producers and Nintendo were generally vague, and often explicitly denied the game's existence.

Late 2007, MTVNews interviewed a couple of Retro Studios producers on the then-new Metroid Prime 3: Corruption. In part of the interview, MTV had a Q&A session with Mark Pacini (Corruption's game director), Tod Keller (art director), and Bryan Walker (game producer) in which Dread's reference in Corruption was discussed and cast aside as a "fluke".[11]

MTV: What's the story behind the apparent reference in "Metroid Prime 3" to "Metroid Dread," the rumored but never-confirmed 2D game some fans hope is being made at Nintendo?
Pacini: "It's not what you think it means… it was something that was overlooked and wasn't in any way indicating anything about the handheld game. We know no information about the handheld games.

MTV: Are you suggesting that you got in trouble or something?
Pacini: Not at all. We actually had a fictional element of something else in the game that by a large coincidence could be read that we were giving a hint about "Metroid Dread" which was not the case. It's a complete and utter coincidence.

MTV: That only makes me more confused. [laughing] I'll see if I can parse what you just said to me.
Bryan Walker, Producer, Retro Studios: I think the bottom line there was [that there was] no innuendo in the reference that you're mentioning.

MTV: But you guys expected that some people would have a reaction to it. That it would be the stuff of news stories, yes?
Pacini: We didn't think anything of it.
Walker: Purely innocuous, really.

MTV: Really? Honestly?
Walker: We're not that clever. No conspiracy.

Upon its release, Metroid Dread received widespread critical acclaim from both critics and general audiences, even winning "Best Action/Adventure Game" at the 2021 The Game Awards. Metroid Dread has an aggregate score of 88 out of 100 on Metacritic from 122 critic reviews, indicating "generally favourable" reviews.[12] Steven Petite of GameSpot praised the game for its graphics and aesthetics, whilst remaining faithful to traditional Metroid gameplay, stating "Metroid Dread is charmingly familiar, an old-school side-scroller with a modern look and feel." [13]

The title has been a tremendous success upon its launch, selling 2.74 million units world wide as of December 2021 and becoming the second highest-selling game in the series after the original Metroid Prime by only 100k.[14]