The Ing-Luminoth War [conjectural title] is a conflict between the Luminoth and Ing races of Planet Aether, occurring prior to and during the events of Metroid Prime 2: Echoes.

During the Golden Age of Luminoth discovery, technology, and culture, a stellar object approached the race's home planet of Aether.[1] Though the Luminoth attempted to use their weaponry to alter its trajectory, these ultimately proved ineffectual and weakened Aether's planetary reserves.[2] The residents stored food and water and took shelter from the blast,[3] but most of the planet was completely ravaged by the impact, hailing the beginning of a Dark Age on Aether. The planet held, despite expectations, but the land was transformed and half of Aether's planetary energy was gone: the Agon Plains were completely scorched and became a desert, and the Torvus Forest was engulfed by floods and turned to marshlands.[4][5] What the Luminoth hadn't forseen was that the collision into Aether had flung the planet and many objects upon it into a state of Transdimensional Flux, meaning that half of that object's total atomic structure was transported to an alternate dimension of the same formations as Aether's current form.[6]

Not much was known about the other world until, during the time J-Gnk acted as the Sentinel of Aether,[7] rifts began to spontaneously appear to that dark dimension, connecting the two lands for the first time.[8] A new race had been formed in the alternate dimension and began swarming out of the rifts, using their unique ability to possess and control life-forms on the indigenous species; the possessed creatures, known by the Luminoth as Darklings, became the main threat during the confrontation and ended their state of peace.[9] Many Luminoth were killed, including the ancient founder of Sanctuary Fortress.[10]

Course of the War[edit | edit source]

One of Aether's Energy Controllers.

Eventually the Luminoth created machines to open rifts into Dark Aether and began sending volunteer scouts through them.[11] Those scouts discovered the missing half of Aether's energy there as well as the true form beings responsible for possessing creatures on Aether, which they named "Ing" after the Luminoth word for terror.[12] The first scouts did not last long in Dark Aether's poisonous atmosphere, but the Luminoth were determined to return.[13]

Before the stellar object impacted Aether, the Luminoth had constructed Energy Controllers as part of a system that regulated and distributed the Light of Aether across the planet, ensuring peace and prosperity.[14] The revelation that Dark Aether had acquired half of that planetary energy, weakening the original Aether and keeping Dark Aether alive, led to the creation of weapons and equipment that would be efficient in fighting the Ing.

The first and one of the most critical Luminoth inventions for the war was the Light Crystal, a portable mineral that emits light energy in Dark Aether, which allowed the Luminoth to explore the enemy land and bring war to the Ing, although the crystals did not protect from Ing attacks.[15] Light Beacons were strategically placed throughout Dark Aether as well. Another ability that the crystals and beacons have is to replenish the health of any creature alien to the alternate dimension and amplify the effects of any element with which its charged. Luminoth armor and weapons proved ineffectual, however, and so they withdrew from Dark Aether in order to create better offensive and defensive technologies.[16]

Because the Luminoth were vastly outnumbered and not prepared to fight a long war, they sought a means to end the war quickly, and to that end they decided to build a device to recover the lost planetary energy from Dark Aether, resulting in its collapse.[17] The device would not be completed until the war's Second Phase.

Luminoth studies of the Ing revealed a dependence on dark energy, which they intended to exploit using a weapon, called the Dark Beam, meant to overload them with that energy.[18] The weapon was not nearly as effective as predicted, and a new weapon was was developed in its stead; thus the Light Beam was brought into commission, a light-based weapon that could exterminate Ing forces efficiently.[19]

Soon the Ing learned to possess Luminoth, turning friends and family against each other and resulting in heavy Luminoth casualties.[20] A new, effective form of armor was created to prevent Ing possession, but it was not perfect, and the practice of self-terminating under imminent threat of possession became commonplace.[21]

The Emperor Ing, ruler of the alternate dimension.

The Luminoth learned that the dark counterpart to their Great Temple on Aether, called the "Sky Temple" by Luminoth forces, was the lair of the leader of the Ing.[22] The temple contained the planetary energy of Dark Aether and was heavily guarded, and the entrance was barred by a gate that required ten Keys to unlock.[23] The keys were hidden across Dark Aether by the Ing, and a mission was planned to claim them and recover the missing energy from the Sky Temple.[24]

That mission came to fruition after the Energy Transfer Module was finally completed.[25] A cadre of ten elite warriors, known as the Keybearers, was equipped with the best armor and weaponry available and sent to invade the Sky Temple and retake the missing energy, ending the war once and for all.[26] All of the warriors were successful in locating the keys they were sent after, though nine were unsuccessful in returning them to the Sky Temple Gateway. Only one of the Keybearers, A-Kul, was able to secure her key and unlock one of the ten locks, though she died before she could return to Aether.[27] In a final attempt to inform anyone else who may try to liberate the Luminoth, she left clues as to where each warrior had fallen.[28]

When none of the Keybearers returned, the rest of the Luminoth went to Dark Aether in search of them, but in vain.[29] The Energy Transfer Module that had been assigned to them had been captured by the Ing, and so the Luminoth set out to prepare another mission and build a second module.[30]

Shortly afterward the Horde launched a massive attack and crippled the land of Agon, slaughtering many of the warriors there.[31] All the defenders of the Agon Temple but the child acolyte squire D-Chr were slain, leaving the boy as the sole defender of the Temple; a centicycle later, he was killed in battle on Dark Aether.[32] When Agon finally fell the energy in the temple was drained: the Energy Transfer Module was being used by the Ing to seize the Light of Aether from the Energy Controllers on Aether.[33]

The forces of the Ing then moved on to Torvus, encountering heavy Luminoth resistance there.[34] Thousands of Ing were slain, including at least one Ing Horde war chief by the Torvus hero B-Stz during the Fourth Battle of Torvus, and numerous battles were fought.[35] When the Ing's superior numbers eventually led to the fall of Torvus, some .3 decacycles after the fall of Agon,[36][37] the energy was to taken to Dark Aether.[38]

The remaining Luminoth forces had gathered at Sanctuary Fortress, preparing for the inevitable siege that would strike the area. Waves of Ing bombarded the Fortress, possessing even the Luminoth mechanoids that had been built there. A mere .1 decacycles later,[37][39] they had drained the energy from the Fortress' Controller. Only the Controller in the Great Temple remained intact on Aether.[40] With all hope of survival lost for the Luminoth, they decided to gather in the Great Temple and enter a life-preserving stasis to be released once the Ing threat was eliminated or sleep forever.[41] The last remaining sentinel of the Luminoth, U-Mos, remained awake to guard the final Energy Controller in solitude, marking the end of the Luminoth's resistance against the Ing.[42]

Revival of the Luminoth[edit | edit source]

Samus Aran's arrival on Aether began the beginning of a new age for the Luminoth. After Samus finds the remains of the GFMC Task Force Herakles and was attacked by Darklings in the Temple Grounds, she proceeded to enter the Great Temple herself. There she was attacked by a Dark Alpha Splinter in the Temple Sanctuary. The creature held the Energy Transfer Module that the Luminoth had created. Although not even her Scan Visor could identify the object, it bonded with her suit and she became immune to Ing possession.[43] She took the elevator to the Main Energy Controller, where she met U-Mos. The last Sentinel divulged to Samus the history of the Luminoth, beginning with the Luminoth Dark Age, that had transpired prior to her arrival, and that he had been waiting for anyone that could save their civilization from extinction.[44]

Samus accepted the mission, and proceeded to journey into each region of Aether and its dark counterpart, taking the stolen energy from Dark Aether and restoring it into the corresponding Energy Controller. During her journey, she met the final hologram recordings of fallen Temple Sentinels of Aether that gave their lives to protect the Energy Controllers. She also recovered the weapon and visor systems of the fallen Champion of Aether, taken by the Ing.

Samus faces off against the Emperor Ing.

In order to gain access to the final Dark Energy Controller and defeat the Emperor Ing, Samus collects all ten Sky Temple Keys hidden across Dark Aether. She finds A-Kul's clues in the gateway where her fallen body lays and collected the keys herself, all hidden in Ingworm Caches that can only be seen using Dark Visor technology. Once all of the keys were collected, she gained access to the Sky Temple and faced off against the Emperor Ing.

After a long battle, the leader was finally defeated, and the energy was restored to Aether. With no energy to maintain its stability, Dark Aether collapsed and the entire dimension was destroyed. Samus managed to escape the destruction of the world and return to the Great Temple, where the awakening Luminoth greeted her. They bowed as she departed, the Ing conflict finally resolved. 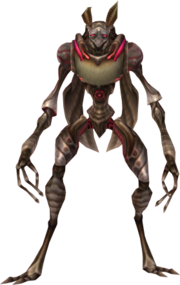 U-Mos is the last surviving sentinel of the Luminoth. He was the only survivor that did not join stasis, as to guard the Great Temple's Energy Controller. He met Samus Aran and informed her on her mission to save their world, and gave her advice on where to go, as well as the Light Suit, the ultimate armor against the Dark World.

Samus Aran is the Bounty Hunter that was called by the Galactic Federation to investigate what had happened to the G.F.S. Tyr on Aether. She eventually met U-Mos and transferred the stolen energy from Dark Aether back to the original mainframe, and destroyed the entire world of Dark Aether.

Main article: Sentinel of the Temple

I-Sha, A-Voq, and O-Lir were the last sentinels of the Temples in Agon, Torvus, and Sanctuary. In the holograms they left behind, they impart information that help Samus on her way.

J-Gnk was the fourth sentinel of Aether and the one who ruled during the first Ing attack.

The Keybearers were the warriors that were selected to retrieve the Sky Temple Keys from Dark Aether.