From Metroid Wiki
(Redirected from Gunship)
Jump to navigationJump to search

Samus Aran's Gunship is the private spacecraft of bounty hunter Samus Aran. The Hunter-class gunship is a one of a kind spacecraft. It was custom built for Samus by the Federated Shipyards at Aliehs III. It contains a mobile energy recharge system, microfactories designed to produce ammunition, and sophisticated onboard computer stores mission data collected in the field for further reference.[1] Throughout the series, Samus uses different models of the gunship, some of which are her own design.[2]

The ship's design and size have shifted greatly throughout the series. Surprisingly, some versions of the ship seem almost identical in games that are not direct sequels of one another, with different designs being introduced between them. For example, the ship seen in Super Metroid makes a 3D appearance in Metroid Prime 2: Echoes but does not appear in any other game of the Metroid Prime series. The ship is easily recognizable from the landing mechanisms located at the bottom of the ship.

Zero Mission marks the only appearance of Samus's original red gunship, as it is destroyed at the end of the game. All her ships from this point on are a yellowish orange color, with the exception of her chronologically latest purple ship, seen in Metroid Fusion.

The gunship that appears in Metroid Prime 3: Corruption is a completely new design (with similar colors) that combines Chozo and Federation technology. Designed by Samus herself, it it based on her original gunship. Like its predecessor, the new model was also constructed at Aliehs III. The vessel is equipped with a powerful Chozo biotech computer that can interface with Samus's Command Visor to deliver aerial bomb raids to locations of her choosing. The ship's weaponry is capable of destroying structures made of Maldium, otherwise invulnerable to Samus's regular weapons. The ship also carries a Biohazard Scanner and its own Grapple Beam.[2]

The gunship first appears in Metroid II: Return of Samus, although chronologically, the ship appears much earlier in the series timeline in Metroid Prime 2: Echoes.

Samus starts her trek through the bowels of SR388 in Metroid II: Return of Samus after landing her gunship on the planet's surface. The ship remains there for the entire game. The ship is equipped with a Missile Battery on the interior's right and a Big Energy Ball on the left, effectively serving as a recharge station for Samus. Metroid II ends when Samus brings the Metroid Hatchling to her gunship. 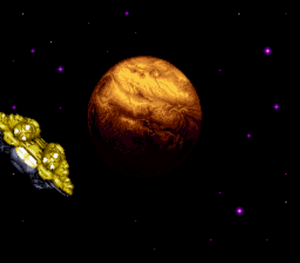 Located on Crateria after landing on Zebes, the Gunship has a similar function in Super Metroid as it does in Metroid II, with a few added capabilities. Merely entering it causes Samus to replenish any depleted ammunition, energy, and to save her progress. After destroying Mother Brain, Samus uses this ship to escape Zebes before its destruction.

The Gunship repairing itself

Samus's gunship lands on Aether after Samus receives a distress signal from the planet. As she approaches the surface, the unstable atmosphere damages the ship. Throughout the game, Samus's ship remains in Temple Grounds' Landing Site, undergoing automatic repairs.[3] There, Samus can use it to save progress and regain energy, Missile Ammo, Power Bomb Ammo, and Beam Ammo.

After defeating Dark Samus in Sky Temple Gateway, Samus returns to Aether and leaves in her gunship. Though the Ship is programmed with a visible interior, it cannot be interacted with at any point in the game.

Metroid: Other M also features the classic ship. The ship is used by Samus in opening scenes and is used to reach the Bottle Ship. Unlike other games, Samus cannot use the ship to save or refill her energy reserves or any of her weaponry. Unlike Corruption, Other M's gunship holds a highly inactive role. It sits parked aboard a Bottle Ship landing site. The controls used for this ship appear different from those of any other gunship; it is controlled via a spherical mechanism similar to a mouse. Samus leaves the Bottle Ship on her gunship after defeating the Metroid Queen and returns to retrieve Adam's helmet. She then escapes again as the Bottle Ship is on the verge of destruction.

Samus's gunship in Fusion before its destruction

This design of the gunship appears briefly in the opening scenes of Metroid Fusion. As Samus maneuvers it alongside the B.S.L station, the X parasites inside her body begin taking over her body and make her lose consciousness. The ship then veers off into an asteroid belt.[4] The ship's safety measures, however, manage to eject Samus within an escape pod, which B.S.L researchers later find. They then send Samus to the Galactic Federation[5] The ship's whereabouts are not mentioned, leaving the assumption that no part of it is recovered, and it is abandoned as scrap in the asteroid belt.

Although not the first ship to be introduced to the series, the Zero Mission Ship is chronologically the first gunship to be piloted by Samus Aran. The vessel makes its first and only appearance in Metroid: Zero Mission. The ship's coloring and design resemble the Power Suit's helmet. In the beginning of the game, Samus lands the ship on planet Zebes to begin her mission. Samus can return to her ship regularly in Crateria to save. Like her ship in Super Metroid, this ship can also replenish her energy and ammunition.

Samus's ship is shot down by Pirate ships

Once her objective (destroying the complex housing Mother Brain) is complete, she takes off but is soon ambushed by a group of Space Pirate fighters. Her ship is shot down and forced to crash land back on the surface of Zebes. Samus eventually escapes the planet in a Space Pirate ship, leaving her ship to be destroyed in an explosion. The vessel is never rebuilt in this design.

No ship is seen in the original Metroid at all. The game begins with Samus already entering the caverns of Zebes, leaving the ship and its design unknown. It is most plausible, however, that Samus uses this design of the ship.

The ship appearing in Metroid Prime and Metroid Prime Hunters is of a new design. The most visible difference to the previous design and the different models that succeeded the ship, are the four maneuvering thrusters, located on the bottom of the vessel. Metroid Prime opens with Samus approaching the Frigate Orpheon aboard her new ship, using the thrusters to make fine adjustments to her landing.

In both Prime and Hunters, the ship is referred to as a Hunter-class gunship, the first ship to be categorized like this. The later models are all Hunter-class, except for the Fusion ship, which cannot be scanned in the game.

The gunship appears in Metroid Prime 3: Corruption with a more active role than in other games. The gunship is used to travel between the game's different areas: G.F.S. Olympus, Norion, Bryyo, Elysia, G.F.S. Valhalla, Pirate Homeworld, and Phaaze. Many of Samus's ship's interior features are shown but do not return in Other M. Samus can enter the gunship to regain all ammunition and energy with the obvious exception of Ship Missile Ammunition. It is unknown why this gunship is not used in later chronological games (Metroid II forward) but is bypassed for the older model.

The ship is revealed to have a hyperdrive system for long range travel. It also has a metal shield that covers the the windshield, likely to be used during sleep, battle, or while using hyperdrive to prevent excessive light exposure. The ship also has a button that activates what appears to be for battle purposes. A red light consumes the ship's interior and a map showing Samus's ship's position is displayed. Samus's gunship has a monitor that displays statistics of Samus's current mission, including enemies killed, shots fired, percentage of rooms found and more. The ship also has a Biohazard Scanner that detects any dangerous substance and amount of substance within Samus's body, notably Phazon. The most interesting piece, however, within Samus's gunship is the transmission console. It allows communication between Samus's ship and other consoles. If the player inputs certain four-digit codes on this console (presumably using Galactic Federation characters), different messages will be heard by the game's developers. These messages are in Japanese in all versions of the game. It is revealed in Samus's battle against Ghor that her ship has a self-repair system, artificial intelligence to some degree, and runs on Fuel Gel.

Corruption also introduces the Command Visor. This allows Samus to communicate with the ship using a console installed in her visor and Arm Cannon. She is seen using this feature in earlier games (such as the ending in Metroid Prime), however Corruption enables the player control of the ship. Samus can call the ship to landing sites marked by Landing Beacons, allowing her to save and use the ship to move to another landing site. Once upgraded with Ship Missiles, Samus can call the ship with the Command Visor to shoot marked areas or areas with enemies and an open sky to send a roll of Ship Missiles crashing. These Missiles cannot harm Samus and can destroy objects made of Maldium. After obtaining the Ship Grapple Beam, Samus's gunship can grab objects marked with ship Grapple Nodes with the Ship Grapple Beam. The ship holds the grabbed object until it is placed in a suitable location. If Samus gives the ship an unrelated command while the ship is holding an object, it will return the object to its original location. 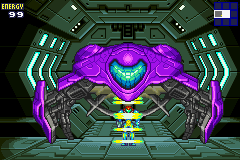 Samus descending from the Fusion gunship

After Samus's first gunship is destroyed on an asteroid belt in Fusion's opening, Samus's ship was replaced by a violet ship. This ship contains an internal computer later revealed to be Adam Malkovich. Samus uses this ship to land on the B.S.L Station and can return to it at any time.

At Fusion's end, Samus returns to the ship after setting the B.S.L station on a collision course to SR388. As Samus reaches the landing pad, however, Samus ship is not there; instead an Omega Metroid that escaped from Restricted Zone is there stopping Samus in her tracks. After defeating the beast, Samus's ship pulls up to the landing pad and Samus can escape. The ship contains within it the Dachora and Etecoon that Samus had rescued earlier in the game.

Registered to Samus Aran, the Gunship is equipped with twin Power Beam turrets and retractable rear-mounted Plasma Beam cannon. The versatile cockpit is used for navigation, regeneration and record retention. This ship survived Samus Aran's mission on Planet Zebes, and is the only space-faring vessel ever registered under the bounty hunter's name.

The principle use of this Hunter-Class Gunship is rapid transport. Dual engines serve this purpose with great efficiency. If battle becomes unavoidable, the ship is outfitted with enough firepower to survive firefights against bigger and more numerous foes. Once the destination is reached, the ship serves as an excellent base camp for ground-based ops.[20]